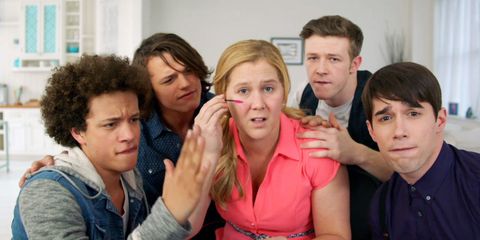 Is there a way for Amy Schumer to actually be any more amazing? She already pretty much dominates everything including comedyand celebrity photobombing, and on Tuesday she proved she dominates Twitter as well.

Shortly before her show aired, Amy asked fans to show her their makeup-free selfies, using the hashtag #girlyoudontneedmakeup. The hashtag was a reference to a sketch that aired on Inside Amy Schumer Tuesday night (watch it below) which some are already calling one of her funniest ever.

(Always take a chance for no makeup solidarity tweets. 👯) pic.twitter.com/XsqomerOGG

These are amazing keep sending! You are all beautiful!! #girlyoudontneedmakeup #InsideAmy

@amyschumer #girlyoudontneedmakeup as long as your dog still wants to kiss you 🐶 pic.twitter.com/nZRXK1zbl7

Even Amy was pretty blown away by the response and kept on asking for more:

people are mad at me for clogging up their feeds. But please keep sending. I am loving them and looking at them all #girlyoudontneedmakeup

Because Chipotle and I like each other more when we're all natural! #girlyoudontneedmakeup @amyschumer #AmySchumer pic.twitter.com/H6jSPe577D

In the sketch, a cute boy band similar to One Direction sings an inspiring song to Amy, telling her she doesn't need makeup because they think she's totally hot without it. That is until they actually see her without makeup. "Hold up girl, we spoke too soon," the boys sing. "We kinda changed our tune on the makeup thing. You'll be the hottest girl in the nation, which just a touch of foundation."

The sketch and song perfectly skewer the trend of men giving approval to women going makeup-free because they like it or even prefer it. This is just another way of holding women hostage to the ever-present male gaze. As Slate's Laura Bradley puts it "The video is a succinct explanation of everything that's wrong with the Bruno Martian school of soulful ditty in praise of a woman who doesn't know how beautiful she is." Yes, Amy nails it with the sketch.

If you want to join in the makeup-free fun, the hashtag #girlyoudontneedmakeup is still going strong on Twitter. Watch the full sketch below:

Rebecca Rose Writer I'm a writer for Cosmopolitan.com manning the fort during the night shift (because I love staying up late and hate getting up early in the morning).
Advertisement - Continue Reading Below
More From Culture
'Good Girls' Is Back for an Explosive Season 3
Netflix's 'Haunting of Hill House' Will Return
Advertisement - Continue Reading Below
Criminal Minds Season 15 Will Be Its Last
The Hot New Podcasts to Add to Your Queue
Who Are the Women of 'The Bachelor' in 2020?
Join Marie Claire's Virtual Monthly Book Club