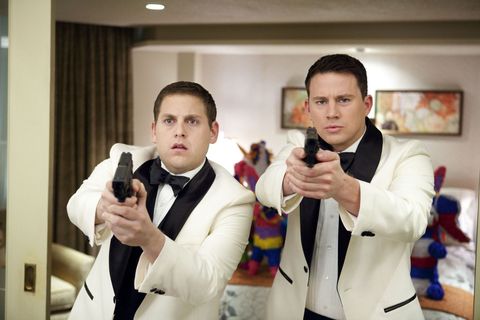 This seems like the perfect fit. After announcing the all-female reboot of Ghostbusters, the Sony team has put another all-female movie remake in motion: 21 Jump Street. And the best part? Two Broad City writers are penning the film.

According to The Hollywood Reporter, Lucia Aniello and Paul W. Downs have signed on and are already in the midst of working on the movie. No cast members have been named yet and no release date, either. But um, we have a few suggestions. Sony, are you listening?

1. Cameos by both Abbi and Ilana and Channing and Jonah would be much appreciated.

2. 21 Jump Street is hilarious, so this one better be, too. We're rooting for you.

3. Any of these actresses would make for a fine film: Anna Kendrick, Alison Brie (who's dating Dave Franco, who also stars in 21 Jump Street—cameo??), Amy Schumer, Emma Stone, Akilah Hughes... Actually, have you hired a casting director yet? 'Cause we're down.

We Have Exciting New Details About the 'Ghostbusters' Remake

Samantha Leal Senior Web Editor I'm Sam, the senior editor at MarieClaire.com.
This content is created and maintained by a third party, and imported onto this page to help users provide their email addresses. You may be able to find more information about this and similar content at piano.io
Advertisement - Continue Reading Below
More From Culture
A New Doc Delves Into the Watts Family Murders
'The Crown' Season 4 Is Coming So Soon
Advertisement - Continue Reading Below
Watch the Emmy-Nominated Michael Jordan Doc
Watch These Ghost Movies at Your Own Risk
'Haunting of Hill House' Will Return Soon
Where You've Seen the Cast of 'Away' Before
Fans Are Clamoring for a Second Season of 'Away'
It's Been a Weird Year for 'The Bachelorette'
Fans Are Speculating About This 'Bach' Contestant
16 Books by Latinx Authors We Can't Put Down