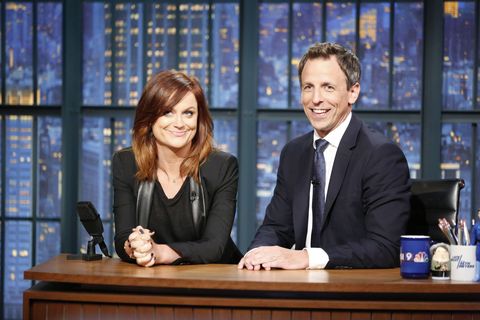 Some people should not go unsupervised onto the Twitter, but they do and we end up with the revival of a beloved SNL sketch plus Amy Poehler plus some really satisfying truths about sports and gender equality. Plus a clueless misogynist being flayed alive on late-night television.

On Wednesday's Seth Meyers, Poehler and the show's namesake roasted (more like incinerated) Sports Illustrated contributor Andy Benoit, who dumbly tweeted that "women's sports in general" are "not worth watching." (He has since apologized.) This is the feat of athleticism he was putting down, by the way:

And here is what Amy and Seth had to say in return, including some *excellent* points about why the Women's World Cup is only broadcast on some random channel, Sports Illustrated's boob fixation, and Serena Williams v. Benoit:

The Sexiest TV Scenes of All Time
How 'Bachelor' Peter Got That Scar on His Face
Advertisement - Continue Reading Below
Who Is 'Bachelor' Contestant Victoria Fuller?
Who Is Hannah Ann Sluss From 'The Bachelor'?
Megan Angelo on Her Debut Novel, 'Followers'
Who Is 'Bachelor' Contestant Madison Prewett?
Pre-Order These Amazing Books Coming Out in 2020
Jenna Dewan's BF Reacts to Channing Tatum's Drama
The Best Korean Dramas of All Time
Mainstream Movies With * A LOT * of Nudity