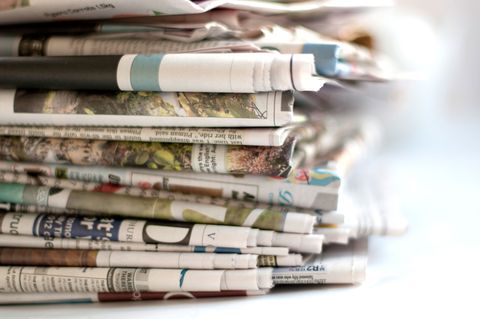 —Following yesterday's landmark marriage equality ruling by the Supreme Court, same-sex couples aren't the only ones celebrating. The Williams Institute at the UCLA School of Law estimates the flux of additional marriages could create a major boom in the wedding industry, to the tune of $2.6 billion in spending. (Quartz)

—President Barack Obama traveled to South Carolina yesterday to give the eulogy for Rev. Clementa Pinckney, one of the victims of the Emanuel African Methodist Episcopal Church shooting. He concluded by singing "Amazing Grace." (Esquire)

“May God continue to shed His grace on the United States of America." —@POTUS http://t.co/14Z3HnNi8v

—Kanye West revealed to Q Magazine that he blames himself for the death of his mother. "If I had never moved to L.A. she'd be alive," the rapper said. (ET)

—After the three-week manhunt for two escaped murderers from upstate New York's Clinton Correctional Facility, one of the killers was shot by a border patrol agent near a cabin in the woods while the remaining escapee is still at large. (AP)

—You can forget about capturing your epic roller coaster scream face this summer, selfie sticks are officially banned at Disney Parks for the "growing safety concern" they pose. (Mashable)

—The Fourth of July is just around the corner. Here's how to get the perfect firework photos using your smartphone. (USA Today)

This content is imported from YouTube. You may be able to find the same content in another format, or you may be able to find more information, at their web site.
This content is created and maintained by a third party, and imported onto this page to help users provide their email addresses. You may be able to find more information about this and similar content at piano.io
Advertisement - Continue Reading Below
More From Culture
Read an Excerpt From 'We Were Never Here'
How to Join Marie Claire's Virtual Book Club
Advertisement - Continue Reading Below
See Inside Julianna Margulies's Personal Library
Could 'Manifest' Come Back for a Fourth Season?
The Most Unmissable Movies of 2021 (So Far)
The Eternal Sunshine of Juno Temple
Let's Talk About That 'Virgin River' Cliffhanger
Zendaya Shared a Teaser of 'Euphoria' Season 2
'Ginny & Georgia' Season 2: Everything We Know
Wait, Where's Hope in 'Virgin River'?