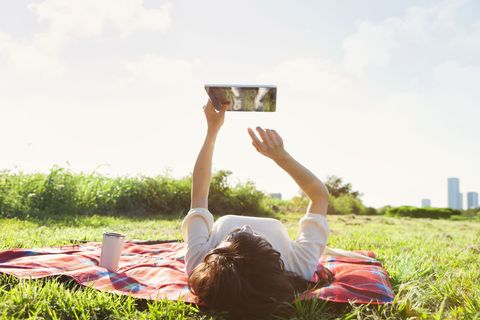 —She may have gone from Glastonbury to Taylor Swift's concert in London all in one day, but model Gigi Hadid swears she's not a part girl. Hadid told Sunday Style, "It's cool that there are girls who can do the whole partying thing, but that's just not me. I honestly wish that I could do fashion week and all the events, but if I don't need to be there, I'm not going. I'm sleeping. There are some girls that party all night and go straight to work, I don't know how." (Sunday Style)

—Joining in the celebration following the Supreme Court's ruling on same-sex marriage equality, New York Governor Andrew Cuomo officiated a gay wedding at the historic Stonewall Inn. The NYC landmark describes itself as "the birthplace of the modern gay rights movement." (Mashable)

—Kanye West was the victim of some pretty irrefutable karma last night at his Glastonbury show, where British comedian Simon Brodkin (aka Lee Nelson) crashed the stage during the rapper's performance of "Black Skinhead." Brodkin later took to Twitter saying, "That was for you [Taylor Swift]." (TIME)

—Shark Week is coming early this summer. Two people were attacked by sharks in just two days off the coast of North Carolina. Both victims were seriously injured and hospitalized. (NBC News)

This content is imported from Third party. You may be able to find the same content in another format, or you may be able to find more information, at their web site.
This content is created and maintained by a third party, and imported onto this page to help users provide their email addresses. You may be able to find more information about this and similar content at piano.io
Advertisement - Continue Reading Below
More From Culture
Will There Be a Season 3 of 'Virgin River'?
Jessamyn Stanley Wants to Talk About All of It
Advertisement - Continue Reading Below
'Bachelor In Paradise' 2021: Everything We Know
What Is Gunther From 'Friends' Doing Now, Anyways?
All the Deets on Michelle's 'Bachelorette' Season
'Life After Happy Face' Is Your Fave New Podcast
The New Horror Movies That'll Leave You Breathless
Zendaya Shared a Teaser of 'Euphoria' Season 2
Listen to the Best New Love Songs of 2021 (So Far)
Meet the Cast of 'Too Hot to Handle' Season 2