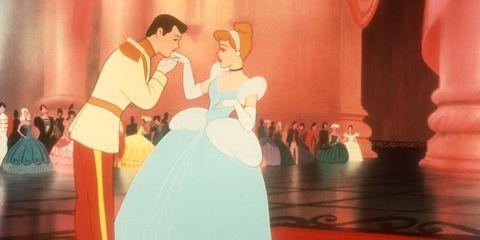 Disney isn't playing games when it comes to making your favorite fairytales new and relevant and magical again. Following the news of a Beauty and the Beast movie that stars practically every single celebrity in Hollywood, the studio will be bringing a new take on Prince Charming to the screen.

According to The Hollywood Reporter, Matt Fogel has penned a script that's being labeled as a "revisionist" tale of the prince. Other than that, we know very little. No, seriously...we have no plot. We have no release date. In fact, we don't even know *which* Prince Charming story will be told—will it be the valiant Prince Charming who saves Snow White from death with a kiss? Or will it be the persistent Prince Charming who searches everywhere for his true love AKA Cinderella with the help of her shoe? Will he actually get a NAME, you guys?

Honestly, our money's on Snow White's PC getting his time in the spotlight, seeing as the live-action Cinderella just came out with handsome Robb Stark, er, Richard Madden starring as "Prince."

Tumblr
Samantha Leal Senior Web Editor I'm Sam, the senior editor at MarieClaire.com.
Advertisement - Continue Reading Below
More From Culture
Jenna Dewan's BF Reacts to Channing Tatum's Drama
The Best Korean Dramas of All Time
Advertisement - Continue Reading Below
Mainstream Movies With * A LOT * of Nudity
Things Between Victoria F. and Chase Rice Got Ugly
Who Are the Women of 'The Bachelor' in 2020?
Rosalía Is the One to Watch at This Year's Grammys
Sydney From the 'Bachelor' Knows Hannah Brown
The 10 Hottest Movies on Hulu Right Now
'The Bachelor' Has Already Finished His Season
When Michelle Carter Is Expected to Walk Free