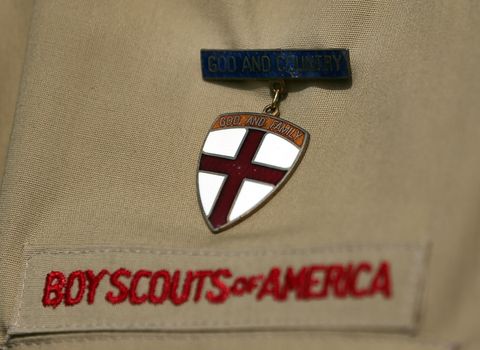 On Monday, the Boy Scouts of America made a historic decision. In a 45-12 vote by its executive board, the BSA decided to lift its ban on openly gay troop leaders, effective immediately.

The Boy Scouts have come under fire in recent years for what many believe are regressive ideologies and practices—while gay youths have been allowed to participate since 2013, gay adults have been blocked, not only from volunteer efforts but also from paid positions and leadership roles.

"For far too long this issue has divided and distracted us," the Boy Scouts' president, Robert Gates, said in a video released yesterday. "Now it's time to unite behind our shared belief in the extraordinary power of Scouting to be a force for good."

Not surprisingly, there's already a backlash—the Mormon Church, which has been a significant participant in the Boy Scouts' efforts over the years, has threatened to pull out. And the BSA's new ruling doesn't come without a catch: While the organization on the whole is lifting its ban on gay leadership, church-sponsored troops are still allowed to choose leaders who reflect their beliefs, even if that means excluding gay men.

This content is imported from YouTube. You may be able to find the same content in another format, or you may be able to find more information, at their web site.
This content is created and maintained by a third party, and imported onto this page to help users provide their email addresses. You may be able to find more information about this and similar content at piano.io
Advertisement - Continue Reading Below
More From Culture
Read an Excerpt From 'We Were Never Here'
How to Join Marie Claire's Virtual Book Club
Advertisement - Continue Reading Below
See Inside Julianna Margulies's Personal Library
Could 'Manifest' Come Back for a Fourth Season?
The Most Unmissable Movies of 2021 (So Far)
The Eternal Sunshine of Juno Temple
Let's Talk About That 'Virgin River' Cliffhanger
Zendaya Shared a Teaser of 'Euphoria' Season 2
'Ginny & Georgia' Season 2: Everything We Know
Wait, Where's Hope in 'Virgin River'?