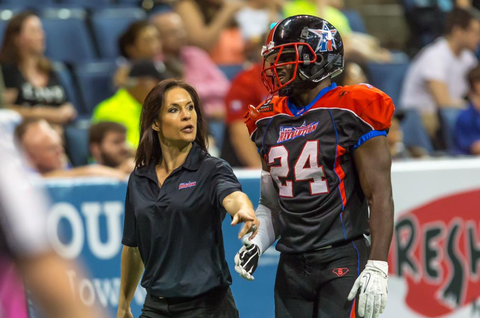 The Arizona Cardinals just made history by hiring the first female coach the NFL has ever had. Dr. Jen Welter, 37, will be an assistant coaching intern working with inside linebackers for training camp and the preseason—and she is the fist woman ever to hold a coaching title of any kind in the NFL.

This isn't just a big moment for female sports fans—it's a big moment for all of us: More women in men's sports means more women everywhere. And as Welter aptly expressed after the news broke, not every Cinderella story has to be about a dress:

"She came for an OTA [organized team activity] and I met her, and I thought she was the type of person that could handle this in a very positive way for women and open that door," Cardinals head coach Bruce Arians said of his new hire.

Welter has a long history of dominating in her sports career—she's played on both men's and women's professional football leagues, and became the first woman to hold a non-kicking position when she was a running back with the Revolution last year. According to Sports Illustrated, she also served as a linebackers coach for the team.

And she's not the only woman making history in sports this year. In April, Sarah Thomas was hired as the first female full-time on-field official for the NFL, and Becky Hammon became the NBA's first female coach.

Times—they are (thankfully) a changin'.