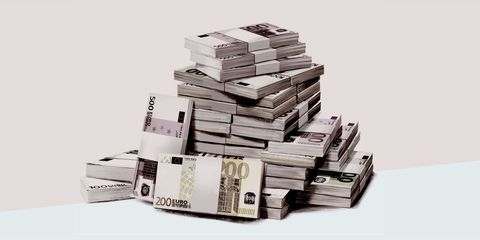 As election year continues to creep up on us, buzz about women in the working world will (hopefully!) remain on the uptick. That's a great thing: We desperately need more conversation about how women can achieve more, access more, and—frankly—do less work for free.

But another discussion we need to be having? Inequality isn't just holding women back—it's holding the world back, for one simple reason: If women were able to work to their full potential and were compensated fairly, we'd see as much as $28 trillion in economic growth around the globe.

It's a huge revelation, and it comes courtesy of the McKinsey Global Institute's newly released study, The Power of Parity: How Advancing Women's Equality Can Add $12 Trillion to Global Growth. "Bridging the gender gap is a really large economic opportunity for the world, for every region in the world and practically every country in the world," Anu Madgavkar, a senior fellow at MGI and one of the research paper's nine authors, told us from Mumbai this week.

Here, the study's five other fascinating takeaways about the gender gap:

Just a quick little reminder from high school economics: GDP, aka gross domestic product, is a primary measurement tool for assessing the health of a country's economy. More generally, it represents the size of the economy. These days, women make up only 37% of the global GDP—a problematic figure that indicates a lack of representation and paid participation in the work world at large.

Healthier economies mean more money for necessities, infrastructure, social programs, education and beyond—there's no downside to bumping that number up. What's more: It will help continue establishing women as 50% partners in whatever is happening in the world.

Discussions about cultivating an equal chore load between partners are at an all-time high, and it goes without saying that many working women want more balance in domestic responsibilities. But MGI's research indicates that, of the regions surveyed, three-quarters of unpaid work is also solely women's work—an issue that is especially acute in the developing world.

Unpaid labor, in this case, is everything from childcare and helping an aging parent to cooking, cleaning, and taking out the trash. The MGI report estimates that these unpaid tasks amount to $10 trillion dollars worth of time and energy—work!—every year. That's about 13% of the current global GDP, so imagine what might happen if women were given the opportunity to channel those unpaid hours into earning power.

Over the course of its research, MGI discovered that, on average, only 22% of parliamentary and ministerial roles are held by women in the surveyed regions. Of course, that's more true in some places than others. But it's incredibly important that women land in influential government and law-making roles—particularly because the people who create policies should also be the people who are impacted by the policies being made. And, while that seems like common sense, it's still taking a lot of time to put into action. Yep, even here in the ol' U.S. of A.

This is the most heartbreaking of the study's revelations, and is all too true in countries where having female children is still seen as a liability instead of an asset. Aborting girls, Madgavkar explains, is often symptomatic of society's development stage, as well as the perceived low economic value of women. Translation? "In India, for example, because of its combination of women not participating in the workforce in large numbers, and the fact that the dowry system is very prevalent," she explains, "a woman or girl who needs to get married becomes a sort of economic liability for the family because now a large sum of money needs to be paid to a groom's family." Many families consider girls to be financial burdens—as opposed to productive members of society who can contribute in a positive way.

Here's the silver lining: The education of the mother has a direct impact on whether or not she chooses to abort a daughter. "Education is actually a great leveler," says Madgavkar. "One of the things we believe—particularly in India—is that as educational gaps get narrowed, the benefit will play out in the next one or two decades as better and better educated women and girls start exercising choices about working or doing what they want to do with their lives."

"If you look at the data that we also present in the report, there is a very large proportion of men and even women across the world who believe that it is justifiable for a partner to inflict violence on his partner under certain circumstances," Madgavkar explains. "Of course, that is not okay." But despite the fact that this issue often gets framed as a social one, Madgavkar points out that there is an economic empowerment link as well. "A culture of violence in society does tend to depress and constrain the freedom of women to really exercise choice about where they work and what work they do and how much they work"—and, by extension, rob women of their autonomy.

One example Madgavkar shared with us: A certain sector in India reported issues in addressing the gender balance issue because women were fearful for their personal safety. Getting home from work posed a problem. Ultimately, some employers went so far as to provide supervised escort vehicles to make sure women returned to and from safely. "This is definitely one of those virtuous or vicious cycles," Madgavkar went on, "and the feedback between economic empowerment an violence works both ways. So cultural violence is a barrier to economic advancement."

But, she added, if you raise the economic stage of women, over time financial independence can work as a deterrent against violence.

Now, doesn't it seem more important than ever for women to dig in their heels and for the world to work with all its might to close the gap? Yeah, we thought so, too.