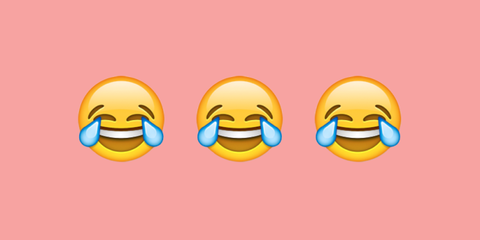 Oxford Dictionaries announced their 2015 word of the year, only...it's not a word at all. For the first time ever, a "pictograph" (AKA what we normals know as an emoji) has been chosen. The "Face with Tears of Joy" emoji, to be more specific.

To find the right emoji, Oxford partnered with Swiftkey, a mobile tech company, to determine which one was the most frequently used this year. The winner was 😂.

We ♥ to swap out actual words for emojis as much as the next person (it's shorthand, people), but would it really have been that hard to find, you know, an actual word?

So @OxfordWords, we're using emojis for everything now? Here's a classic convo:

How does your student loan debt make you feel?
Tell us in 3 emojis or less.

Other contenders this year included "lumbersexual" and "on fleek," which we hope they realize is actually two words, nonetheless two we're definitely partial to. All we can say is, here's to being one step closer to reverting back to hieroglyphics.