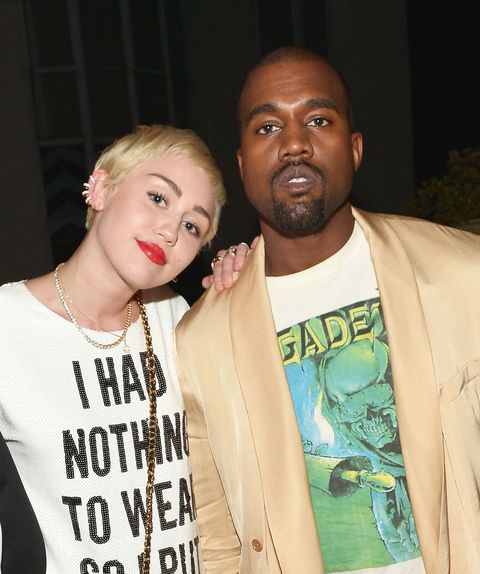 The year was 2013, and Miley Cyrus had reportedly left the VMAs early after shocking the nation by twerking on Robin Thicke and daring to wear a nude latex bra set on network television. But it wasn't shame that compelled her to make a hasty exit—no, it was a higher power. Meaning Kanye.

Leaked Wednesday evening, the result of their rumored meeting turns out to be a mashup of Tears for Fears' "Everybody Wants to Rule the World" and a more sedate "Black Skinhead," with possible appearances from Travis Scott and Lupe Fiasco. Is it weird? Yes. But is it not kind of great? Also yes.

Listen to the mythical track here.

Chelsea Peng I'm Chelsea Peng, the assistant editor at MarieClaire.com.
Advertisement - Continue Reading Below
More From Culture
The Best Korean Dramas of All Time
Mainstream Movies With * A LOT * of Nudity
Advertisement - Continue Reading Below
Things Between Victoria F. and Chase Rice Got Ugly
Who Are the Women of 'The Bachelor' in 2020?
Rosalía Is The One To Watch At This Years Grammys
Sydney From the 'Bachelor' Knows Hannah Brown
The 10 Hottest Movies on Hulu Right Now
'The Bachelor' Has Already Finished His Season
When Michelle Carter Is Expected to Walk Free
How Much Time Did Michelle Carter Get in Prison?