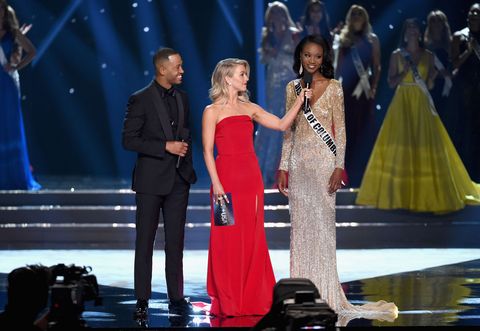 This year's Miss USA crown went to Miss District of Columbia, a decision that seemed like a no-brainer. That's because the winner is a badass Army captain who can also rock an evening gown and stand up for fellow women in uniform.

Deshauna Barber is a Logistics Commander of the 988th Quartermaster Detachment at Fort Meade in Maryland. Both her parents and both of her siblings have also served in the military. She often takes the time to represent her fellow service members, both in the pageant world and online, and has a best friend deployed in Afghanistan right now.

So Excited To Represent Our Service Members On The Miss USA Stage On June 5th on Fox 7/6c 👑💜 Is your calendar marked? 😏

Happy Mothers Day to the strongest, sweetest mother and step mother I could ask for! My mom is so incredibly strong and my step mother has treated me like her own since the first day we met when I was 8 years old! Thank you both for the impact you have made on my life! @irmalavette 💜👑

Today was a slightly hard day for me. My best friend deployed to Afghanistan last week and I will be honest, I am scared and I miss her dearly. Coming from an army family I recognize the dangerous sacrifices soldiers make everyday and the anxiety that comes with knowing your loved one is overseas. I thought to myself what does her deployment mean to the country? What does her sacrifices mean to this nation I call home? I thought to myself, What does it mean to wear this uniform and stand in front of our flag? I realize it means much more than just patriotism or love for a single nation. This uniform to me means standing up for LOVE and FREEDOM in a world that lacks it. Considering all the events happening nationally and internationally, I feel most inclined to say God Bless America. I feel most inclined to say "I Am A Proud American". Every Time I put on my uniform I thank God for allowing me another opportunity to represent the greatest nation in the world. We have come along way and have a long way to go. Regardless of our hurdles as a nation and as a people of the United States Of America let us not forget the ones who have made the ultimate sacrifice so we can live each and everyday as a free people in a world that lacks freedom. Let us not forget the families that have suffered. Let us not forget that no country is or ever will be perfect. So in a nation filled with flaws it is our responsibility to perfect it, to fight for it, to sacrifice for it and with our very hands craft it into the best nation in the world with highest level of ethical standards and values. In a world filled with hate we must learn to love and to embrace each and every person to our left and right..... No matter their gender, race or religious beliefs. We must do this not only because it is the right thing to do but because of the soldiers that have died and risked their lives so we can all live as a diverse and equal nation. God Bless America🇺🇸🇺🇸🇺🇸🇺🇸

"The Pentagon recently made the decision to open up all combat jobs to women. Some have questioned whether this has put political correctness over our military's ability to perform at the highest level. What are your thoughts?"

Later on, she gave a speech on what it means to be "Confidently Beautiful:"

"Serving in the military has taught me that being confidently beautiful is about being able to earn respect from people regardless of what you look like. As a woman in the military, people associate beauty with weakness and they learn very quickly that I'm extremely strong, and though I'm small, I'm powerful. Confidently beautiful is being myself and being very happy with who I've become."

She should have just taken the crown right then and there. Watch the full interview clip below: