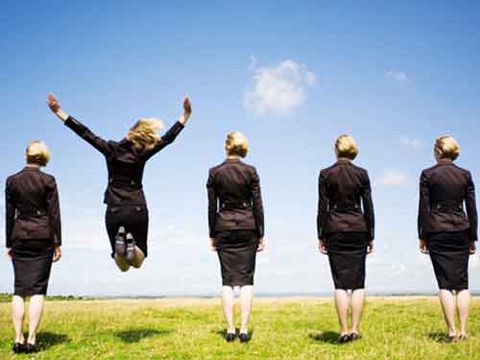 WHO KNEW? ALCOHOL IMPROVES YOUR MEMORY.

Moderate alcohol consumption actually sharpens your mind and decreases the risk of dementia as you age. Warning: Swigging the entire bottle of wine, however, will most likely lead to forgetting the events of the night.

An adjustable high-heel shoe has been created by a student at the Pratt Institute in Brooklyn, NY: Press a button and it goes from high heel to midheel to flat. Somewhere, vertically challenged boyfriends are cheering.

YOUR ODDS OF BEATING BREAST CANCER ARE BETTER THAN EVER.

Early detection and treatment has dramatically increased survival Your world is actually improving! We dug deep for the good news about chocolate, sex, your paycheck, and more rates of breast-cancer patients since the 1990s. More than 90 percent of cases are now caught in the first and second stages, which yield 98- and 80-percent survival rates for five years, respectively.

Mr. and Mrs. Jones, take note: Happiness researchers (yes, they exist) have found that as long as your basic needs are met, more wealth does not make you happier. In fact, it can actually trigger anxiety.

THE HOLE IN THE OZONE IS SHRINKING.

Environmental awareness and action are finally starting to pay off. The hole in the ozone layer over Antarctica has actually shrunk 20 percent since 2003.

YOUR GUY LOVES YOU JUST THE WAY YOU ARE. REALLY.

An impressive 92 percent of guys wouldn't want their girls to get boob jobs, Harlequin's romance report revealed. Tragically, the news comes too late for Tara Reid.

YOU'RE SAFER NOW THAN LAST YEAR.

According to the Department of Justice, rates of violent crime (homicide, rape, and aggravated and simple assault) have reached the lowest levels since 1973—the year the department started keeping track— and have fallen a whopping 33.4 percent since 1994.

Smooth skin? Check. Sweat-free armpits? Check. Now, researchers have discovered even more uses for Botox: soothing migraines, improving speech, and taming an overactive bladder. Our one concern: Just where exactly do they stick that needle?

Thought you couldn't put a price on a good sex life? Two economists did it. They calculated that, in terms of happiness, having sex more often is equal to getting a $50,000 raise. Now, if only we could charge our men overtime . . .

YOU CAN EAT CHOCOLATE WITHOUT THE GUILT.

Ecco Bella has created "functional" chocolate. One bar relieves cramps and other PMS symptoms; another improves skin (healthbychocolate. com). We'll really be impressed when they make a "functional" doughnut.

PANDAS ARE DOING BETTER THAN WE THOUGHT.

You probably haven't lost sleep over Ling-Ling and Hsing-Hsing lately, but according to an official survey by the World Wildlife Fund and the State Forestry Administration of China, the giant-panda population is 40-percent higher than previously thought.

SEEDLESS LEMONS ARE NOW A REALITY.

How many times have you silently (or not so silently) cursed as you choked on those annoying seeds in your lemonade? Good news—someone was listening. A California agricultural company has acquired the rights to our favorite citrus, sans seeds. Buy them at limoneirafresh.com.

OUR GALAXY HAS A SPARKLING FUTURE.

Astronomers have discovered that some planets in the Milky Way may contain enough carbon to produce an entire underground layer of diamonds. Bonus: As the galaxy ages, diamond planets will form more frequently. Beam me up, Scotty.

IF YOU LAUGH A LOT, YOU CAN SKIP THE GYM.

After having subjects watch a 15-minute segment of the Woody Harrelson comedy Kingpin, cardiologists concluded that laughter creates the same increase in blood flow as aerobic exercise. Proof that our DVD collection was a better investment than our treadmill. Also proof that cardiologists need to see funnier movies: Kingpin??