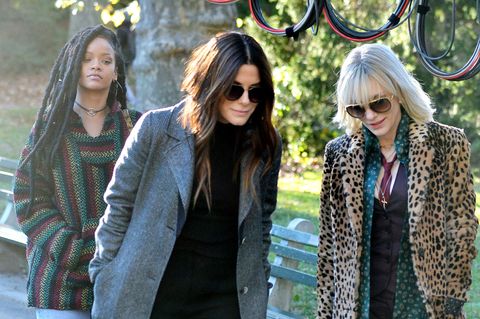 The all-female Ocean's 8 is currently filming in New York City, and it stars literally everyone cool in the world. Basically, this squad is on 🔥. While set photos from Ocean's 8 are leaking all over the internet, we've yet to see an official photo...until now.

Our first official look at the all-female #Oceans8 is here! 🙌 The photo from the #Oceans trilogy spinoff shows the film’s principles — #SandraBullock, who is the leader of a group of thieves which include #CateBlanchett, #Rihanna, #AnneHathaway, #MindyKaling, #SarahPaulson, #HelenaBonhamCarter, and #Akwafina. 👏 Click the link in our bio for more details. 📷: Barry Wetcher

A post shared by Entertainment Weekly (@entertainmentweekly) on Jan 30, 2017 at 4:11am PST

The film hits theaters in June 2018, and is reportedly about this epic squad pulling off a heist at the Met Gala.

Mehera Bonner Contributor Mehera Bonner is a news writer who focuses on celebrities and royals—follow her on Instagram.
Advertisement - Continue Reading Below
More From Culture
There's Going to Be a 'Love Is Blind' Reunion
The Truth About the 'My Dark Vanessa' Controversy
Advertisement - Continue Reading Below
Behold This Beyoncé-Inspired Gymnastics Routine
'The Bachelor' Has Already Finished His Season
An Investigation Into the Next 'Bachelorette'
The Sexiest TV Scenes of All Time
Unmissable Horror Movies Coming Out This Year
Treat Yourself to a Chick Flick Tonight
Who Will Be on 'Bachelor in Paradise' in 2020?
Can We Talk About Kelly's Mom From Love Is Blind?