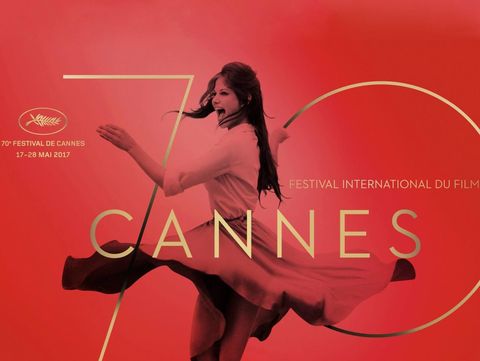 The festival recently debuted their poster, and at first glance it's simply a lovely image of Italian actress Claudia Cardinale twirling on a Roman rooftop in 1959. The thing is, it's photoshopped to make her waist and legs appear thinner.

This is NOT cool. At all. pic.twitter.com/2WBIIiLMnX

While the internet is obviously so not here for this, Cardinale herself doesn't seem too bothered. "This image has been retouched to accentuate this effect of lightness and transpose me into a dream character," she told The Huffington Post (via The Guardian). "This concern for realism has no place here and, as a committed feminist, I see no affront to the female body. There are many more important things to discuss in our world. It's only cinema."

Status update: strongly disagree. It might only be cinema, but this poster carries with it a not-so-subtle implication that the female body isn't good enough as it is. Do better, person in charge of making Cannes posters.

Mehera Bonner Contributor Mehera Bonner is a news writer who focuses on celebrities and royals—follow her on Instagram.
Advertisement - Continue Reading Below
More From Culture
Great New Movies Based on Real Events
You Can Now Take a 'Love Is Blind' Vacation
Advertisement - Continue Reading Below
The Best New Music of 2020 (So Far)
Will Hannah Ann Sluss Be the Next 'Bachelorette'?
The 13 Sexiest Movies on Netlfix
'The Bachelor' Has Already Finished His Season
An Investigation Into the Next 'Bachelorette'
This Amazon Reality Show Is a Fashion Girl's Dream
The 25 Sexiest Music Videos of All Time
Who Is 'Bachelor' Contestant Victoria Fuller?