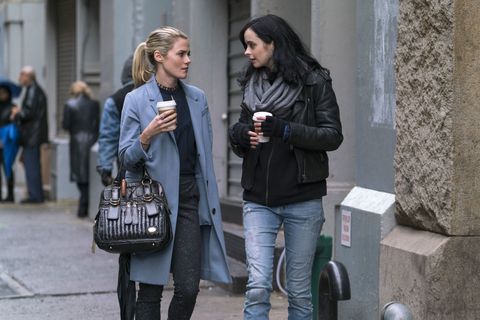 Marvel's The Defenders is about to drop on Netflix, and the new teaser is full of Easter eggs. Which, apt, since Easter is right around the corner.

In the 16-second clip, we see Jessica Jones, Daredevil, Luke Cage, and Iron Fist riding an elevator together in extremely grainy footage—presumably after an epic fight.

But there's more to the story than meets the eye. Netflix cleverly revealed the show's premiere date in the footage—the clock in the right corner stops at 08:18:20:17—AKA August 18, 2017.

Not only that, ET notes that if you enter the line of numbers on the top of the screen in your URL field (http://23.253.120.81), you're taken to the New York Bulletin—the newspaper Karen Page runs in Daredevil, which doubles as Marvel's new website setting up the fictitious world The Defenders will be operating in. So. Cool.

FYI, if you want to catch up on Marvel's Netflix offerings, Daredevil Seasons 1 and 2 are on Netflix, along with Jessica Jones Season 1, Luke Cage Season 1, and Iron Fist Season 1.