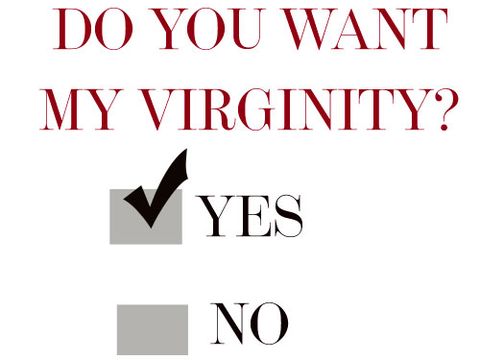 MOM ALWAYS SAID, DON'T GIVE IT AWAY: Natalie Dylan, 22, is selling her virginity. The aspiring marriage and family therapist (no kidding) from San Diego, CA, describes her business plan as "being pro-choice with my body." As of press time, Dylan (a pseudonym) claims the high bid is $3.8 million; the deal will be consummated at the Moonlite Bunny Ranch brothel in Nevada, where prostitution is legal. Dylan says she will submit to an exam to prove her purity.

SICK IDEA: Dannille Vanderpool, a police dispatcher in Napa, CA, faked ovarian cancer to score more than $50,000 in donations, thanks to fundraisers held by friends. The 35-year-old even shaved her head to get that chemo look, scaring her 8-year-old child. Arrested in April, she was charged with 13 counts of grand theft.

TIES THAT BIND: In an attempt to extort $50,000 from her ex-husband, Alejandra Arriaza, 39, of Miami, had herself kidnapped, along with her 17-year-old son, this past spring. Her plan went south, however, when police raided the apartment where they were being held. Turns out the kidnapper was Mom's boyfriend. The couple, now in custody, could face life in prison.

NEWS OF HER DEATH, GREATLY EXAGGERATED: Kimberly Du, 36, of Des Moines, IA, forged her own obituary back in December 2005, hoping to dodge the $500 in fines she'd racked up in traffic tickets. But a month later, Du was pulled over for speeding, while very much alive. The judge gave her two years' probation and ordered the lead-footed Lazarus to pay the $500 fine.

LOSING THE BABY WEIGHT: Belgian Sonia Ringoir, 31, was accused by her estranged husband of selling their twin baby boys for $13,000 to a friend this past winter. Why? To pay for gastric-band surgery. A slimmer Ringoir was charged with "degrading treatment" of children, and faces five years in prison.