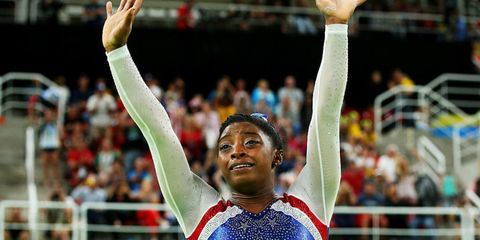 From the vivid green pool to a Usain Bolt smile that launched 1,000 memes.

1 of 36
Ukraine's synchronized divers spin so quickly you can't even see them.
2 of 36
Andy Murray serves to Japan's Kei Nishikori during the Men's Singles Semifinal.
3 of 36
Rowers at the Lagoa Stadium.
4 of 36
Mohamed Farah of Team GB wins the Men's 10,000m.
5 of 36
Meredith Michaels-Beerbaum of Germany competes at the Olympic Equestrian Centre.
6 of 36
India's Dipa Karmakar competes in the Women's Vault event final.
7 of 36
Italy vs. Egypt proved to be a contrast in cultures on the women's beach volleyball court.
8 of 36
After winning the bronze medal, Lithuanian weightlifter Aurimas Didzbalis celebrates with a backflip.
9 of 36
Katie Ledecky shatters the world record (and handily beats her competition) in the Women's 800m Freestyle.
10 of 36
Simone Biles waves to fans after winning the Women's Individual All Around Final.
11 of 36
Shaunae Miller of the Bahamas dives to win gold in the Women's 400m, beating American Allyson Felix in a photo-finish.
12 of 36
Monica Puig wins Puerto Rico's first Olympic gold.
13 of 36
First-time Olympian Ryan Held can't contain his emotions on the podium.
14 of 36
Michael Phelps kisses his son Boomer after the medal ceremony for the Men's 200m butterfly.
15 of 36
Simone Manuel reacts to winning the Women's 100m Free. She is the first African-American woman to ever win an individual gold for swimming.
16 of 36
Yusra Mardini, a member of the Refugee Olympic Team, wins her heat in the Women's 100m Butterfly prelims.
17 of 36
Ethiopian runner Etenesh Diro continues to compete in the 3000m Steeplechase, even after losing her shoe.
18 of 36
Team USA sweeps the podium for the Women's 100m Hurdles.
19 of 36
U.S. Olympic hurdler Nia Ali celebrates with her son Titus after winning silver.
20 of 36
Nikki Hamblin of New Zealand helps Abbey D'Agostino of the U.S. after a collision.
21 of 36
Usain Bolt once again wins the title of the World's Fastest Man (and the Internet) with this meme-worthy photo.
22 of 36
An Olympic lifeguard sits in front of the newly green pool.
23 of 36
Cycling champion Kristin Armstrong shows son her gold after the medal ceremony.
24 of 36
Matthew McConaughey: the ultimate Olympic fan.
25 of 36
Aly Raisman breaks down after her final event in the all-around competition.
26 of 36
Michael Phelps leads Chad le Clos in the Men's 200m Butterfly.
27 of 36
The United States wins the gymnastics team competition.
28 of 36
Gabby Douglas grabs the bar, competing for Team USA.
29 of 36
Simone Biles competes on the balance beam for a shot at the all-around.
30 of 36
Lauren Hernandez soars above the beam during the team Gymnastics competition.
Next
The 8 Best New Wearable Tech Devices 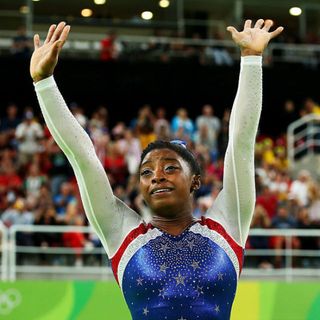