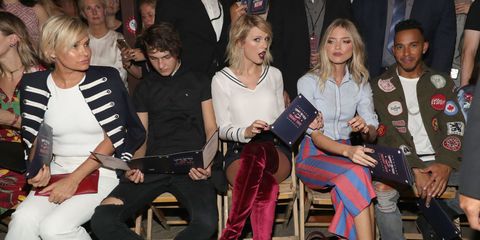 Taylor Swift hadn't made an official public appearance since Kim Kardashian's Snapchat takedown and her breakup with Tom Hiddleston until tonight, when she sat front row to cheer on Gigi Hadid, OG squad member and 1989 World Tour guest.

With Yolanda Foster, Anwar Hadid, and Martha Hunt in the front row

Swift came out to support her friend's work at New York Fashion Week. Gigi Hadid and Tommy Hilfiger debuted their joint Tommy x Gigi collection at South Street Seaport and Swift, like the BFF she is, wore Hadid's designs to the event. Which made Hadid very happy:

As well as the Internet:

Swift also basically provided the soundtrack while sitting in the front row. She recorded Hadid walking down the runway while "This Is What You Came For" played—the song she cowrote with her then-boyfriend Calvin Harris (a fact it took a scandal to unveil). Swift triumphantly bopped her head to it, perhaps her way of saying post-Harris/VMA shade that it's my success too, Harris. Also, it's a really good song...

Swift generally is a rare sight at runway shows: She last came out in February 2015 for Oscar de la Renta.

Her second last show was Elie Saab's in October 2012.

The power of friendship!

Swift wasn't the only one who gave Hadid extra special support tonight. Hadid's boyfriend Zayn Malik did too with one cute, public Instagram.

Not quite front row, but he did that the other night when she walked Tom Ford.

Alyssa Bailey News and Strategy Editor Alyssa Bailey is the news and strategy editor at ELLE.com, where she oversees coverage of celebrities and royals (particularly Meghan Markle and Kate Middleton).
This content is created and maintained by a third party, and imported onto this page to help users provide their email addresses. You may be able to find more information about this and similar content at piano.io
Advertisement - Continue Reading Below
More From Fashion
Spring 2021's Best Trends: Bras, Cutouts, Florals
Leather Leggings Are Better Than Jeans, Hands Down
Advertisement - Continue Reading Below
40 White Elephant Gifts You’ll Want to Steal
Princess Charlene of Monaco's Top Looks
Cozy Sweaters That Conjure Up Fireplace Vibes
The Shoe Trends of Winter 2020
Key Fashion Trends to Know for Fall 2020
How to Wear Chanel Pumps
The Most Controversial First Lady Fashion Moments
Your Favorite Celebs in Gloriously ﻿'80s Fashion