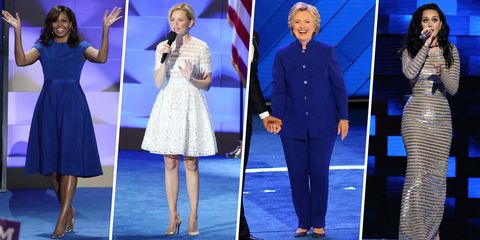 The Democratic National Convention drew not only politicians and activists to Philadelphia's Wells Fargo Center, but A-list celebrities like Meryl Streep, Lena Dunham, and Eva Longoria. You already know what powerful things they said—so here, let's discuss what they wore, shall we?

While giving a moving speech detailing her struggle with mental illness, Lovato rocked a pink minidress with studs from Dior's pre-fall 2016 collection.

So cute: 11-year-old Karla and her mom, Francisca, perfectly coordinated their alternating black and white ensembles for their speech on immigration.

"DREAMer" and activist Astrid Silva brought her statement purple hair to night one of the DNC, where she spoke about immigration policy.

Silverman kept her look streamlined and elegant with a LBD and a sleek up-do during her DNC speech.

Longoria wore a white printed dress from her own very own line, Eva Longoria Collection for the Limited.

Michelle wowed in a royal blue Christian Siriano dress. She easily stole the show on the first night, with her perfect FLOTUS wave, those famous arms, and of course her epic speech. Ugh, Michelle, do you really have to go?

Banks wore a printed white dress by Elie Saab for her turn on the DNC stage.

Getty Images
8 of 29
Mothers of the Movement

The Mothers of the Movement speakers, one of the DNC's most powerful moments yet, appeared on stage mostly wearing all-black. The mothers (whose sons and daughters were the victims of police brutality) showed their solidarity by all wearing big, red flowers pinned on their lapels.

Day performed on the second night of the DNC, wearing all pink everything. Her pale pink suit is by Hellessy and she accessorized with a printed scarf by cjw.

The duo embraced the color-blocking trend with coordinated white and black dresses. Dunham wore a white off-the-shoulder dress by Gabriela Hearst while Ferrera opted for a black and white sheath dress by Black Halo, adding red heels for a pop of color.

Debra Messing made her DNC appearance in a navy blue Teri Jon dress, with peplum and ruffle detailing.

Streep wore the most patriotic ensemble yet. She chose an American flag dress by Catherine Malandrino, a dress with a history so storied that it's been making red carpet appearances since 2001.

For her DNC performance, Keys wore a graphic-tee with a message about the power of love, an oversized jacket, and a pair of huge hoops. Her hair was styled in a black and white printed head scarf showing off her curls.

Jones opened up the third night wearing a b michael dress in blue, one of the most popular colors of the DNC, and a broach to accessorize.

Weaver also stuck to the black and white trend, wearing a simple and chic suit for her speech on the third night.

Bassett chose a lighter shade of blue for her convention dress, wearing the simple yet elegant pencil dress by Karen Millen.

Bell wore a black and white ruffled dress as she joined the group of Broadway Stars who took the stage to sing, "What the World Needs Now Is Love."

Perez also joined the bevy of Broadway Stars to perform, wearing a bright red dress with a matching red lip.

Former Representative Gabrielle Gifford wore a black and blue suit with pearls and a flower broach as she discussed her hope of soon saying "Madame President."

The Second Lady of the United States, AKA SLOTUS, wore a summery white sleeveless dress with striped detailing.

The lady of the hour, Hillary, wears a blue power suit after Obama's rousing speech supporting her at the end of night three.

King goes for an elegant all-black look as she opens night four of the DNC with a performance.

Congresswoman Joyce Beatty, a Democrat representing Ohio, wore a white dress with ruffled arms by Roksanda that should look familiar. It's the same dress that Melania Trump wore at the RNC just last week. Sometimes, dresses speak louder than words.

One of the convention's youngest speakers, Chloë Grace Moretz wore a sophisticated black suit by Coach.

A star in stripes! Perry wore one of the few printed dresses (this sparkling one by Michael Kors) at the DNC for her amazing performance.

The potential First Daughter (once again) wore a red sleeveless dress to introduce her mother.

The presidential nominee doing what she does best: shattering glass ceilings and wearing an epic white pantsuit while doing so. 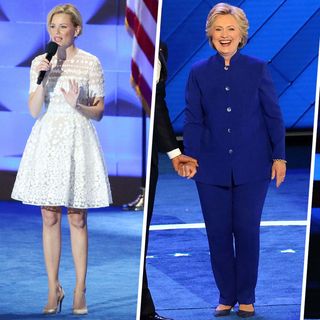