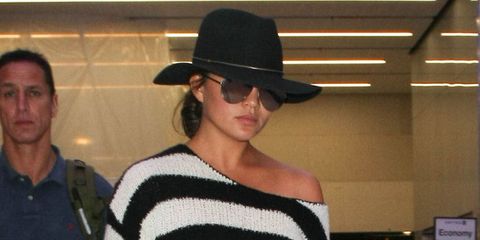 Ever since Chrissy Teigen and John Legend announced they were expecting their first baby, we've kept an eye on the model's best style moments. Now that Baby Luna and her heart melting cuteness have arrived, Teigen's major style moments have continued. Click through for all of Teigen's best looks on and off the red carpet.

Teigen was spotted at LAX in Los Angeles in a striped, off-the-shoulder top and wide-brimmed hat.

Teigen was spotted shopping in Los Angeles wearing a slouchy gray sweater, a long black scarf, and jeans with a pair of booties.

Chrissy wore all white *everything* while at a Target event in New York. She wore an eggshell jumpsuit by MARIO DICE with an embellished bodice and pointed heels by Louboutin.

Teigen braved the chilly New York temperatures in a long black coat by Alexander McQueen. She also wore a printed blouse by Philosophy Official, and black jeans with a gold belt.

Chrissy posed with her hubby John Legend in a black dress with a high slit. The model accessorized with a clutch and strappy black heels.

Teigen wore an off-the-shoulder top with high-waisted pants and black heels while at a Stella Artois event in New York.

Only Chrissy could pull of winter white this flawlessly! The model wore a 70's-inspired ensemble while out in New York: a flared jumpsuit with a brown belt and matching bag.

Date night! Chrissy wore a sheer printed dress with a black belt and matching clutch while out with John Legend in New York.

Chrissy looked flawless in this *major* white jumpsuit with a matching coat and a black belt in Los Angeles.

Chrissy looked so very chic for a night out with Legend. She wore a velvet striped top by Caroline Constas with high-waisted jeans and a bold red lip.

Chrissy is giving us serious #OutfitGoals as she showed off her famous legs in a velvet mini dress while in London.

Teigen stepped out in an embellished dress by Michael Kors at the God's Love We Deliver event in New York.

Chrissy wore the perfect combo of sheer and suede while out in NYC. The model was spotted in a sheer top by MM6 Maison Margiela and a suede skirt by Sally LaPointe. *So* good.

Chrissy wore the fall ensemble of our dreams! The model slays in a sweater dress with a pair of thigh-high boots and a low pony.

Teigen arrived at the Michael Kors show during Fashion Week looking runway ready. She wore a matching skirt, crop top, and coat ensemble all by Kors.

The cutest accessory of all time: baby Luna! Chrissy wore jean shorts and a nude tank while at the beach in New York. Like a true pro, the model is walking in sand while wearing clear heels. Legendary.

Chrissy wore ripped jeans, a black bodysuit, and a long green coat while at LAX with John and Luna. Her hair was in a sleek top knot and she accessorized with a pair of oversized sunnies.

Teigen wore an elegant semi-sheer black dress and strappy heels while attending a screening of her show Lip Sync Battle in Los Angeles.

Chrissy = serious summer outfit goals. The model stepped out in New York wearing blue jeans and a cream top with a silk jacket. She wore a pair of mirrored sunglasses to match.

Luna's parents are a dapper duo! While out with John in New York, Chrissy wore a black dress with a *major* slit and her hair in a super high top knot.

In the face of ridiculous, unsolicited parenting advice, Teigen keeps living her life... and looking good while she's at it. For a dinner out in NYC, she wore a ravishing red Mason by Michelle Mason wrap dress and camel coat worn on the shoulders.

Making her first post-baby appearance on a date with her husband John Legend, Teigen opted for a beige sweater, leather pants, and brown trench coat.

Chrissy arrived at the Guys Choice Awards in Los Angeles wearing a embellished DION LEE dress that showed off her amazing legs with shoes and a clutch by Jimmy Choo.

Chrissy Teigen's due date is just around the corner and she's flaunting her pre-natal glow. The model showed off her rapidly growing baby bump in a sheer crop top and low-slung One Teaspoon jeans while out shopping in Beverly Hills with her mom.

Teigen stepped out for a lunch date with John Legend in Malibu wearing a bold floral maxi from Marni.

Chrissy Teigen was feeling especially animal-friendly this weekend. She was spotted walking her French bulldog out in NYC, dressed in a white bodycon dress and a pony print trench.

Once again proving that she can truly pull off any style, Chrissy Teigen wears milkmaid-inspired braids with an oversized t-shirt dress, black leggings, heeled black booties, and a classic pair of aviator sunnies while out in NYC.

Another day, another bump-bearing outfit win for Chrissy Teigen. She was spotted leaving The Daily Show with Trevor Noah in New York in a black dress, showing a little bit of leg and whole a lot of that pregnancy glow.

Next
All of North West's Fashion Week Outfits 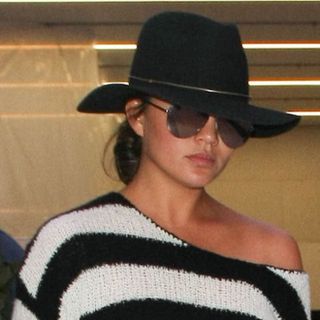