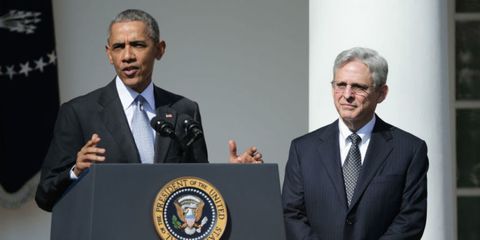 President Obama has officially nominated Judge Merrick Garland, 63, to the Supreme Court to fill a seat left vacant by the death of Justice Antonin Scalia last month. Obama made his nomination official during a speech at the White House Rose Garden Wednesday morning. In his speech, he praised Garland's "decency, modesty, integrity, evenhandedness, and excellence," and made it clear that he's supported on both sides of the aisle. "To find someone who just about everyone not only respects, but genuinely likes, that is rare," President Obama said. "The one name that has come up repeatedly, from Republicans and Democrats alike, is Merrick Garland."

He also talked about Garland's previous career before working in the federal court system, which he has done for 19 years. He led the prosecution of Timothy McVeigh, found guilty in the Oklahoma City bombing, and of "Unabomber" Ted Kaczynski before becoming a judge, and being nominated to his current seat in federal court.

The President also discussed the Republicans' obstruction to even giving a nominee a hearing. "Our Supreme Court is unique. It's supposed to be above politics. It has to be, and it should say that way," Obama said. "To suggest that someone as qualified and respected as Merrick Garland doesn't even deserve a hearing, let alone an up or down vote, when two thirds of Americans believe otherwise, that would be unprecedented."

Prior to his Supreme Court nomination, Garland was the chief judge on the U.S. Court of Appeals for the District of Columbia. He is the oldest judge to join the Supreme Court since Lewis Powell, who joined the court in 1972 at the age of 64, according to The Los Angeles Times. Garland was nominated to his chief judge position by President Bill Clinton in 1996, but wasn't confirmed until the following year, after Clinton had his own reelection.

A native of Chicago, Garland is considered a moderate, a sign, perhaps, that Obama aims to compromise with Republicans in Congress who have promised to not even consider the president's nominee. They've said the vacancy on the Supreme Court should be selected by the next president, who won't take office until next year.