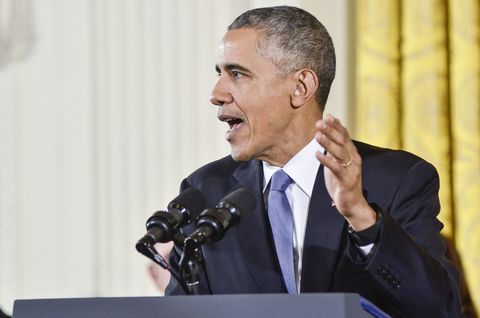 In case you hadn't noticed, former reality star Donald Trump is still running for president, and actually might win the Republican nomination. Like, this is a thing that could actually happen.

"I continue to believe Mr. Trump will not be President and the reason is because I have a lot of faith in the American people and I think they recognize that being President is a serious job," he said during a recent news conference. "It's not hosting a talk show or a reality show. It's not promotion. It's not marketing. It's hard. And a lot of people count on us getting it right. And it's not about pandering and doing whatever will get you in the news on a given day."

Watch Obama's thoughts on Trump below, and pray for our nation while you're at it.

Mehera Bonner Contributor Mehera Bonner is a news writer who focuses on celebrities and royals—follow her on Instagram.
Advertisement - Continue Reading Below
More From Politics
What the ACLU Will Fight For in the Next 100 Years
Behind the Controversy at the Women's March
Advertisement - Continue Reading Below
Women Are Not Granted Equality in the Constitution
Electability Is About Us—Not the Candidate
Everybody Running for President In 2020
Time’s Up for Wall Street
Women of Color Ruled Last Night's Debate
Cory Booker, Rosario Dawson Are Traveling Together
Is Megyn Kelly a Feminist or What?
Door Knocking With Field Organizers in Iowa