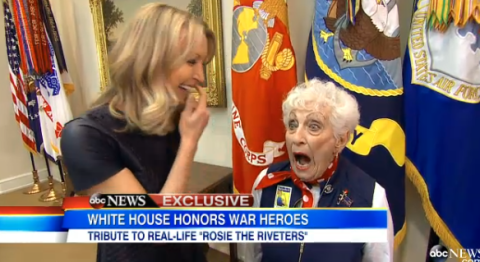 Real life Rosie the Riveter, Phyllis Gould, helped blaze the trail for women in the workplace today and thought that she and her colleagues deserved some credit. She wrote letters to the White House for the past 12 years in hopes of having hard working women during World War II honored for their dedication and contributions. She thought: If men on the front lines could be recognized, then the women who ditched their at-home roles to work in factories to make more airplanes, guns, and other war necessities should be honored as well.

Vice President Joe Biden took notice finally and invited Phyllis and five of her former Kaiser Shipyard co-workers to the White House. During their visit he acknowledged that these women were the start of a liberation of female workers whose actions not only changed the outcome of the war, but of gender relations for decades to come.

The best part? Well that occurs at roughly 5 minutes into the video clip above.