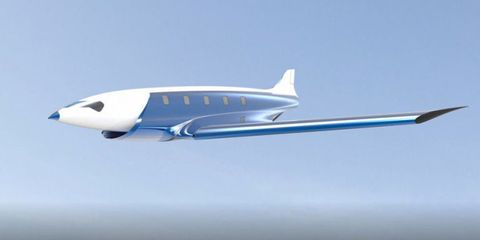 How great would it be if you could travel to the other side of the Atlantic in the same amount of time it takes you to get to work in the morning? While this sounds like the stuff dreams are made of, those dreams might just become reality soon thanks to the invention of the new 'Antipode' plane, which professes to be capable of transporting passengers from London to New York in TWENTY MINUTES.

Seriously, drying my hair takes longer than that.

But the jet could seriously achieve such a feat. As METRO reports, the plane would travel at supersonic speeds after take off, which would probably feel more like blast off, and would ultimately reach an acceleration of a staggering 24 times the speed of sound.

The brains behind the invention is Canadian designer Charles Bombardier. He explained it would work using the concept 'long penetration mode' to channel air super speedily via a nozzle on its nose, meaning it could travel at 18,264 miles per hour. That's a casual ten times faster than the Concorde flew.

Before you have images of being blasted into space, the jet only flies at 40,000 feet — not dissimilar to the current commercial planes we're used to.

While this sounds great and all, if it does ever make it to the mainstream market, it's going to be expensive. The aircraft will apparently only seat 10 people, so you can probably imagine how much one of those places would cost.

Still, it looks like the future could be here sooner than we thought.

Catriona Harvey-Jenner Digital Features Editor Cat is Cosmopolitan UK's features editor covering women's issues, health and current affairs.
This content is created and maintained by a third party, and imported onto this page to help users provide their email addresses. You may be able to find more information about this and similar content at piano.io
Advertisement - Continue Reading Below
More From Travel
No Clue Where to Go in Turks & Caicos? Start Here
I'm Afraid to Travel by Myself in My Own Country
Advertisement - Continue Reading Below
Over Cabo? Head to Punta de Mita, Mexico, Instead
The Instagram Guide to Lake Tahoe
Head to These Destinations for a Late Fall Getaway
The Insta-Worthy Places to Visit in October
You Can Rent These Tiny Homes on Airbnb for $1
Where to Stay, Eat & Explore in Sag Harbor
The Instagram Guide to Coronado, California
6 Easy Escapes From NYC