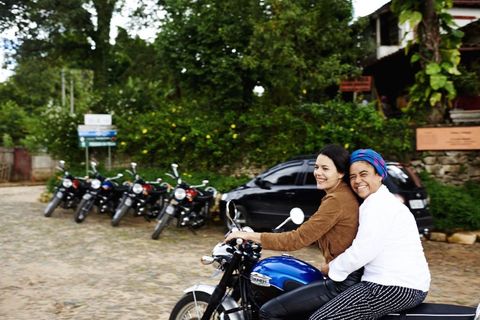 The girls woke up early in Tiradentes and had breakfast at a café-terrace where they learned a lot about the village history from their waitress.

Communicating has been a struggle since the girls arrived in Brazil. It is rare to find French speakers, and as they themselves don't speak Portuguese, they have to use all their skills to navigate their way through. Louise D knows basic Spanish, Cindy is fluent in Italian, Cecile and Louise B prefer English and Pauline speaks only French.

Some say, however, that food is a universal language. They were right...

In Kitanda restaurant, the Portuguese-speaking chef Tanea Romao and the girls created a delicious Brazilian lunch, filled with local ingredients. And by the end, everyone understood each other perfectly. (Well, or they were just happy and full.)

Louise B did most of the cooking with Tanea, as, in addition to being a doctor and a biker, she's also a wiz in the kitchen.

Tanea has a very special role – she finds old Brazilian recipes that have been lost over the generations. According to her, recipes disappear for two reasons: "One of them is because people discover new ingredients and forget the old ones," she says.

The other has to do with social change: "As quality of life improves, people leave behind the symbols of harder times, such as certain types of food."

An ingredient that was recently rescued by Tanea is the banana belly-button (or banana flower) – which, for today's lunch, was turned into a deliciously crispy garnish for the tucupi pork.

"There are secrets to make it tastier, such as adding baking soda to remove bitterness. However, this is the kind of thing you can only learn from elders, as they are the ones that keep old kitchen secrets. Many times, these people don't believe anyone would be interested in them."

After trying the bean broth, flour, pineapple butter, polenta and cheese bread, the girls hit the road again towards Ouro Preto. Not before taking Tanea outside the kitchen for a bike-ride though! Without hesitation, there she goes: on the back of Cindy's bike.

It's still raining. The girls had planned on riding the ancient Gold Road, but it appears to have been partially flooded. Best case scenario, they might be able to cover 30km at the end of the day, but only if they feel in good shape. Alas, lightning streaks the sky and, in the pouring rain, they decide to put safety first and travel to their next destination on asphalt.