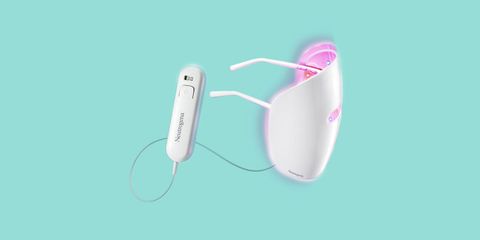 I first learned of Neutrogena's new LED Acne Mask, how else, but by scrolling through Instagram. Its Stormtrooper-like silhouette and Enter the Void glow were total selfie bait and being the curious, snap-happy beauty editor I am, I knew it would only be a matter of time before it landed on my face.

As far as my personal acne struggles go, my complexion is by no means flawless—I have occasional breakouts and subsequent post acne marks (my skin is very sensitive)—but acne isn't my primary skin concern. So at first, I thought using this LED mask was a little excessive. However, I learned that the mask is actually only intended for mild or moderate acne, and does not benefit severe cases. On the same token, if you've got clear skin, you shouldn't use the mask as a preventative measure.

In the simplest terms, the mask is meant to emit energy in the red and blue regions of the LED light spectrum to treat mild or moderate acne—like blackheads, whiteheads, pimples, and postules—on the face.

How does it do that? Well, as you probably know, acne starts with a buildup of oil under the skin, which causes a type of bacteria to multiply. Pores are then blocked by this bacteria, excess oil, and dead skin cells, and a breakout occurs. The UV-free LED light works to penetrate the skin to reduce the bacteria. The blue light is known for its anti-acne properties, while the red is known for reducing the appearance of wrinkles by boosting collagen production.

I made a point of testing the mask during New York Fashion Week, which is always a particularly stressful time. I'm not sleeping enough, eating as healthy, or giving my skin the same due diligence. Well, this time around being the exception.

Per the instructions, I used the mask accompany in addition to my daily skincare routine. So each night, I'd cleanse, tone, and moisturize (occasionally masking with Renée Rouleau's Triple Berry Smooth Peel), then throw the mask—a sheet of white plastic attached to a pair of lab glasses—on for 10 minutes. It looks ridiculous, and kind of scary, so I recommend warning your roommates in advance.

Now, unlike a clay or sheet mask, it's much harder to multi-task with a bright LED mask. Whether I tried to zombie scroll through my phone or watch a show on Netflix, it was way too much stimulation for my eyes. It was a loooong 10 minutes. and novelty wore off quick, but I begrudgingly kept at it for an entire week.

This said, I wasn't mad at the results. My trial coincided with that time of the month and my skin definitely appeared clearer with less blemishes and overall redness. I wouldn't call it miraculous—I still relied on concealer and liquid foundation for coverage—but I was asked by my friends if I was doing anything different and that definitely counts for something.

As far as recommending the mask to my grown-ass woman friends, I'm not sure I would given how tedious it is. I'd much sooner do so to my teenage sister who is probably more concerned about acne and has more free time. However, if you have you heart set on LED technology for acne, but don't have the funds for pricey treatments at a facialist's or a premium at home mask (which can cost upwards of $1,000), at $35, Neutrogena's really is an impressive bargain. So if you're *really* committed, may the force be with you.