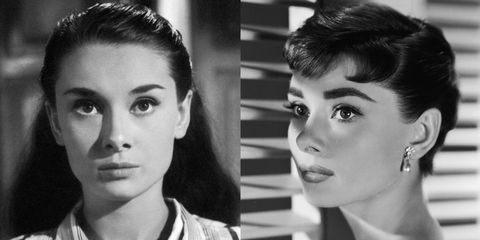 As many an Oscars ceremony has reminded us, actresses will go to great lengths for a role—even if it means doing a complete 180 with their hair. Just last week, Jane the Virgin's Gina Rodriguez shaved half of her head to star in Annihilation alongside Natalie Portman, who underwent a similar head-baring transformation in 2005's V for Vendetta.

From buzz cuts to adventures in an entirely new shade, here are nine of the most jaw-dropping transformations we've seen from these decidedly audacious leading ladies.

Her Jane the Virgin character may be a goody two-shoes, but that didn't stop Rodriguez from debuting a badass undercut on the set of the forthcoming Annihilation, which is directed by Ex Machina director Alex Garland and also stars fellow chameleon Natalie Portman.

One of the most iconic scenes of 1997's G.I. Jane finds Demi Moore shaving her head to show what she's made of in her pursuit of becoming a NAVY Seal. Two decades later, Moore's daughter Tallulah Willis had her mom give her the same buzz cut.

Hepburn may have chopped off her long locks for her coming-of-age role in Sabrina (1954), but the modern coiffed bob became one of her signature looks in the decades that followed.

Dormer's The Hunger Games: Mockingjay - Part I character is described as "a woman with a shaved head tattooed with green vines." Dormer's IRL undercut was a punk-rock take on the fictional character and we were not mad at it. You can watch all the buzz action here.

Shaving her head for Mad Max: Fury Road (2015) didn't just benefit Theron's art. "I had just finished two press tours and my hair was destroyed from heat damage, so I was glad to get rid of it," she said at the time. "I was also a new mom and just loved the idea of not having to style my hair every morning. The timing was perfect."

Blanchett went completely bare for 2002's Heaven, and it may not be the last time. "Shaving off my hair is so liberating," she said. "At school it was probably to rebel, but I cut my hair short a few years ago and I'm thinking about doing it again."

Natural brunette Mara didn't just dye her hair to become the raven-haired Lisbeth Salander in The Girl With The Dragon Tattoo (2009), she also went for the chop, sporting a messy pixie cut.

Portman had no qualms about parting with her long brown locks for her heart-rending role in 2005's V for Vendetta. The actress rehearsed the scene with help from volunteer guys in the crew.

It's hard to imagine Hudgens, who is always one for waist-grazing waves, with a cropped 'do, but she bravely parted with them to play a pregnant, homeless teen in Gimme Shelter (2013).

Lauren Valenti Associate Web Editor I’m the associate web editor at Marie Claire.
This content is created and maintained by a third party, and imported onto this page to help users provide their email addresses. You may be able to find more information about this and similar content at piano.io
Advertisement - Continue Reading Below
More From Beauty
How Model and CEO Miranda Kerr Does Self-Care
Tea Tree Oil Is a Great Zit Fix for Sensitive Skin
Advertisement - Continue Reading Below
Pretend You're on Vacation With Beachy, Wavy Hair
Moisturizers Your Dry Skin Will Soak Up
Sunscreens Developed for Oily, Acne-Prone Skin
Deep Conditioners Your Curly Hair Will Love
The Best Retinol-Infused Creams, Oils, and Serums
This Film Is a Love Letter to Perfume-Making
Our Favorite Powder Sunscreens for Every Skin Type
The Tweezers That Never Let Us Down