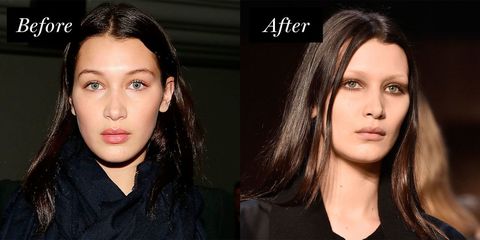 If dyeing your hair platinum blonde is brave, bleaching your brows is downright intrepid. The stars that have taken the peroxide plunge are proof enough it's a game-changer. From Kendall Jenner to Katy Perry, see all the million dollar faces who threw caution to the wind and made their arches invisible.

It's not uncommon to find Gaga with washed-out brows, but for Marc Jacob's Fall 2016 show, she took the look next level with a decidedly gothic face beat.

Not usually one to GAF, Rose lightened her arches to match her blonde buzz cut. Just when we thought her skin couldn't get any glowier...

Bleach brows aren't usually synonymous with the bombshell look, but leave it to Shayk, who was also part of Givenchy's Fall 2016 show, to make 'em look sexy.

Also a member of Marc Jacobs' Fall 2016 troop, this wasn't the first time Jenner took the peroxide gamble for the runway.

Kardashian decided to bleach her pronounced dark arches for the 2016 Met Gala and her newly-lightened brows made her—arguably the most famous woman in the world—unrecognizable.

The supermodel is such a bleached-brows devotee, it's more out of the ordinary to catch her with them darker and filled in.

Never one to shy away from bringing the drama, it's no surprise that Madge strayed from her signature light-haired-dark-brow look to take on this unorthodox trend.

For her role in The Girl with the Dragon Tattoo, Mara underwent an extreme makeover and her canceled-out arches were the icing on the cake.

Because she's a badass, Sevigny casually hit the Seabiscuit premiere with invisible brows in the early aughts. Oh what a time to be alive.

One more member of Givenchy's fall army, Swanepoel's brows, or rather her lack thereof, is what really made the graphic statement eyes pop.

She may have dyed her brows back to their normal color just hours later, but there's no doubt Baldwin was pulling off her bleached arches during London Fashion Week.

While Perry changes her hair like a girl changes clothes, the same can't exactly be said for her brows. So when she donned transparent arches for the first time, it was an unforgettable moment...even by her standards.

Set against her oft-bleached coifs, Cyrus' dark brows have become one of her most notorious signatures. So when they disappeared on her Instagram, it sent her rabid fanbase into a tizzy. 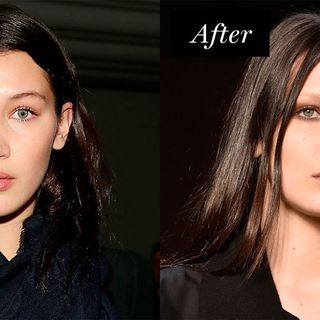 Advertisement - Continue Reading Below
Lauren Valenti Associate Web Editor I’m the associate web editor at Marie Claire.
This content is created and maintained by a third party, and imported onto this page to help users provide their email addresses. You may be able to find more information about this and similar content at piano.io
More From Beauty
What to Buy From Sephora's Spring Savings Event
Snuggling Gives Kristen Bell a Great Sense of Calm
Advertisement - Continue Reading Below
The Ultimate Guide to the DIY Pedicure You Deserve
Jen Batchelor Schedules Self-Care on Her Calendar
Face Masks That Double as Acne Treatments
Behold, Your Skin Type Cheat Sheet
Created for From Marie Claire for Created by Marie Claire for
Neutrogena
Sunscreens That Won't Leave a Cast on Dark Skin
At-Home Laser Hair Removal Devices That Work
Found: Skincare Acids for Darker Skin Tones
Dazzling Makeup Looks From the Spring Runways