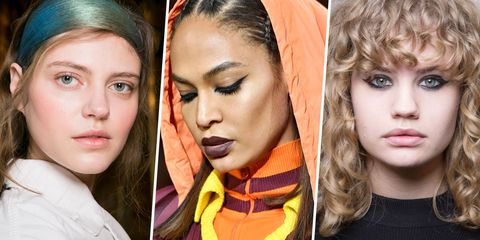 Paris Fashion Week has a tendency to go out with a bang and beauty-wise, this season was no exception. From subversive statements to that pared-down French aesthetic, here are the hair and makeup trends that struck a chord.

Hair accessories are always a given at Paris Fashion Week and this go of it we saw all sorts of statements. Chanel's Barberella-inspired 'dos were topped off with crystal-encrusted designs worn over the ear, while classic black medium-width styles framed the face of every model at the H&M studio show. However, the most impressive of all were the double-take-inducing "headbands" at Issey Miyake, which were actually created from the model's own hair and painted blue-green.

As far as feline flicks were concerned, key artists were laying 'em on thick. Balmain went full-on warrior with smudged-out wings accented with white liner to extend the whites of the eyes. At Fenty x Puma, there were a variety of liner statements including pronounced black flicks extended out to be parallel with tail of the brow. And at Valentino, there were reverse burgundy cat eyes to match the dark berry lips for a monochrome makeup effect.

This season, designers continued to embrace individual textures and the most shining example of hair diversity could be seen at Stella McCartney show, where lead hairstylist Eugene Souleiman opted out of product completely and used water to manipulate each model's natural tresses. How's that for keeping it real?

Season after season, we've come to expect large-than-life looks from makeup artist Pat McGrath. So imagine our shock when at two major shows, she went the no-makeup makeup route. (Of course we knew there was more than met the eye.) At Loew, McGrath used her Skin Fetish 003 Highlighter to strobe the skin, while at McCartney sweeps of brown shadow on the lids warmed up the face.

Whether defined spirals or loose waves, there was an emphasis on a soft-to-the-touch finish when it came to curls. At Dior, hairstylist Guido Palau opted out of using a curling iron and instead looked to tissue to create and set the romantic bends. For Nina Ricci, broken hairs around the face were slicked down in elegant fashion, but the loose hair was styled into silky loose waves. Finally at Chloé, where French girl beauty was paramount, every mane was simply air-dried.

Many of our favorite eye statements appeared on or around the brow bone and it's got us inspired to play up the oft unthought-of area of the eye. At Alexis Mabille thick metallic gold shapes were painted above the lids, while at Yves Saint Laurent and Mugler, black liner was traced along the brown bone—messily at the former and razor-sharp at the latter.

Lauren Valenti Associate Web Editor I’m the associate web editor at Marie Claire.
This content is created and maintained by a third party, and imported onto this page to help users provide their email addresses. You may be able to find more information about this and similar content at piano.io
Advertisement - Continue Reading Below
More From Beauty
The Best Supplements for Glowing Skin
Hair Dryer Brushes Will Change Your Blowout Game
Advertisement - Continue Reading Below
A Dermatologist's Guide to Ferulic Acid
Editor's Pick: Our Favorite Hand Soaps
Soothe Your Dry Palms with These Luxe Hand Creams
Sephora Collection Just Launched a New Foundation
Keratin Treatments You Can Do At Home
How Marie Kondo Does Self-Care
Kick Off 2021 With A New Fragrance
Layered Haircuts For Every Face Shape