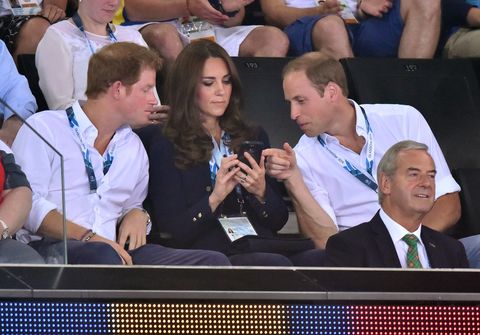 Did something feel different when you woke up this morning? Perhaps the air you're breathing feels more sophisticated, shinier somehow? If so, there's a reason: As of about 5 a.m., the atmosphere has been buzzing with royal tweets. That's right: Kate Middleton, Prince William, and Prince Harry are now on Twitter.

Welcome @KensingtonRoyal, the official twitter account for The Duke and Duchess of Cambridge and Prince Harry pic.twitter.com/sYEtbdajv6

This, of course, won't be the first time a member of the royal family has tweeted. Prince Harry sent out a message last year and the Queen is all been there, done that, got 43K retweets, dudes:

It is a pleasure to open the Information Age exhibition today at the @ScienceMuseum and I hope people will enjoy visiting. Elizabeth R.

But what will this feed look like?!?! @KensingtonRoyal has already posted a bunch of tweets that are of the more impersonal, general royal news variety, but maybe, maaaybe that's only because Kate, Wills, and Harry haven't yet been fully trained on the Twitters? Perhaps once they've got the hang of the 140 characters thing, we'll see tweets straight from their fingers? And if so, how will we know who's responsible for the thing? Will they sign each tweet with initials or a nickname ("-KM," "-P.Dubs," "-GingerPrince," "-HRH2B," "Harry"?), or just leave us guessing?

Below, some tweets we're expecting to see on the @KensingtonRoyal's feed:

Listening to "Flawless" on repeat this morning! Hashtag I woke up like this! —Duchess of Cambridge

The Queen Name-Drops 'Game of Thrones,' Internet Loses It

Every Outfit Kate Middleton Wore on Her NYC Tour

Sally Holmes Editor in Chief Sally is the Editor in Chief of Marie Claire where she oversees coverage of all the things the Marie Claire reader wants to know about, including politics, beauty, fashion, and celebs.
This content is created and maintained by a third party, and imported onto this page to help users provide their email addresses. You may be able to find more information about this and similar content at piano.io
Advertisement - Continue Reading Below
More From Celebrity
Prince Charles Shares Final Exchange With Philip
William and Kate's Children Just Love Airplanes
Advertisement - Continue Reading Below
Jennifer Aniston Answered Bizarre Fan Questions
Prince Charles "Really Wants to Meet" Lilibet
Britney Spears Deleted Her Instagram Account
Megan Fox Won't Be Told "What a Woman Should Be"
Jennifer Garner Shared an Emotional Message on IG
Travis Scott Discussed His Parenting Style
Kanye West Unfollowed Kim Kardashian on Instagram
Kate Hudson Is Engaged to Danny Fujikawa