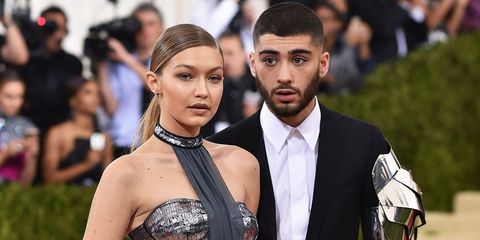 Gigi Hadid and Zayn Malik nearly redefine the phrase "couple goals" whenever they post PDA together on social media, so it should come as no surprise that their couple's Halloween costume is a perfectly coordinated display of cuteness.

It's been a while since Hadid last posted a photo with the popstar boyfriend, but she ended that hiatus this evening when she teased him dressed as Spider-Man with this fine boomerang.

Next came the big costume reveal. Shortly after posting the preview, Hadid shared a photo of herself with Zayn, both in full superhero garb. She dressed up as the Black Cat (AKA Felicia Hardy, one of Spidey's girlfriends) in a platinum blonde wig, full vinyl catsuit, eye mask, and choker. She even finished off the look with her favorite model-off-duty footwear, a pair of pearl-embellished black leather boots by 3.1 Phillip Lim. (Consider that one way to add a high-fashion touch to your DIY costume.)

Though Hadid, 22, and Malik, 24, have been dating since late 2015, this appears to be the first time they dressed up for Halloween together. Sure, they've coordinated their robot-inspired Met Gala ensembles last year and matched several more times during casual outings, but strangely, they haven't done so on this specific holiday. There's a first time for everything.

Related Story
The 20 Most Epic Celebrity Halloween Costumes Ever

Scout's Honor 🎃🖐🏼🌲🐻🎖 thanks to my fwends @erinparsonsmakeup @nailsbymarysoul @raisingkaned, who play dress-up with me on the reg, for helping me pull together a look after work !!! HAPPY HALLOWEEN 💙

And the year before that, she was a Danny-less Sandy at Heidi Klum's extravaganza in New York:

Whether she's rocking a solo or couple's costume, Gigi knows how to do Halloween.

Advertisement - Continue Reading Below
More From Celebrity
Real Humans Justin & Jessica Are Going to Therapy
Why the Queen Canceled One of Her Annual Events
Advertisement - Continue Reading Below
Channing Tatum Shuts Down Jessie J Hater on Insta
Celebrities Who Are Mistaken for Other Celebs
Dolly Parton, Icon, Started a Viral Meme
Meghan & Harry's Trademark's Been Blocked for Now
Khloe Kardashian's House Has a Room for Extensions
Katie Holmes Stuns in a White Oversize Coat
Taylor Swift Opens Up About Past Eating Disorder
Courteney Cox's 'Friends' Photo Has a Sweet Secret