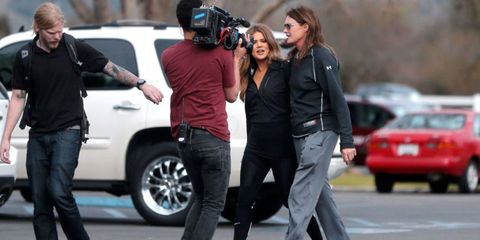 A source has confirmed to People that Jenner has halted production on the show, and that the project may be shelved all together.

"Bruce's primary goal is to bring awareness to this issue in order to help others [in the transgender community]," a source told People. "He is not sure that E! and a reality show is the best format to do that."

The source continued that Bruce, 65, "wants this to be taken seriously so that [his situation] can have the most positive impact on society's perception of the transgender community."

Furthering previous reports that he'd stepped out on his own in the reality show production stakes, TMZ says that Bruce Jenner is filming a new docuseries, focused on what his stepdaughter Kim recently described as "his story" to tell. He's working with E! — the same network as behind KUWTK and all its spinoffs — but is apparently "calling all the shots" on this new project, which will be entirely separate from his family's other shows.

"Fundamental changes in his life" will be shown, TMZ says, adding ,"We're told a significant portion of the docuseries will involve Bruce's interaction with doctors, discussing procedures and goals." This is surely a deliberately vague dance around any confirmation of what exactly those "changes" and "goals" will be, because presumably a site, and its supporting cast of paparazzi, that retains such a focus on the Kardashians has a much clearer picture at this point. But that's a fair decision, editorially: as we've previously argued at Cosmopolitan.com, it should be Bruce's decision entirely to say what, if anything, is going on with him, and also when to do so. People magazine reports, likewise, that the film crew working on the show "have been told to keep everything hush-hush."

Us Weekly, however, says it outright. Their sources report the show "will follow his decision to transition from a male to a female," the tabloid's new issue reports, touting a "brave announcement" on the cover. (As previously reported, the subject will apparently feature in Keeping Up With the Kardashians' 10th season, though it didn't pop up as a plot line in the show's teaser trailer.)

Kim Kardashian: Bruce Will Tell His Story on His Own Terms