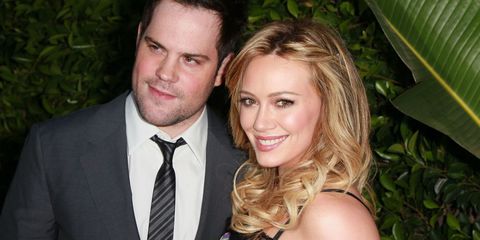 Just over a year after separating from her retired hockey player husband Mike Comrie, Hilary Duff has officially filed for divorce. The two were married in August of 2010.

According to TMZ, the 27-year-old star has cited irreconcilable differences as the reason for the split. She's asked for sole custody of the couple's almost-three-year-old son, Luca, with visitation rights for Comrie.

The divorce comes as somewhat of a surprise, because Duff and Comrie were spotted out together multiple times after their separation, engaging in what most would refer to as "PDA." It pointed towards a possible reunion, but today's news certainly sets the record straight.

At the time of their initial separation, Duff's rep said of the former couple, "They remain best friends and will continue to be in each other's lives. They are dedicated to loving and parenting their amazing son, and ask for privacy at this time."

Here's hoping their divorce is as amicable as their split.

Surprise! The Divorce Rate in America Is Actually Dropping

This content is created and maintained by a third party, and imported onto this page to help users provide their email addresses. You may be able to find more information about this and similar content at piano.io
Advertisement - Continue Reading Below
More From Celebrity
See a Rare Portrait of Princess Diana's Mother
Jennifer Lopez on Learning to Love Herself
Advertisement - Continue Reading Below
The Queen May Honor Kate Later This Year
Olivia Wilde & Harry Styles Keep It Profesh on Set
Prince Harry on How Tabloid Attacks Changed Him
Watch Orlando and Katy After Her Performance
Kate Middleton Debuted Long, Straight Hair
Prince Harry's Surprise Inauguration Appearance
Chrissy Teigen Shared a Cute Tom Hanks Story
Gigi and Zayn Finally Reveal Their Daughter's Name