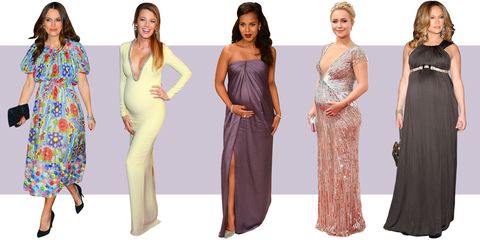 There's a lot of pressure on women to get "back" into shape after having a baby. Which is to imply that a woman's shape post-baby somehow needs correcting. That pressure is perhaps most acute for celebrities who are trolled by paparazzi eager to get that first post-baby pic, who are expected to appear in front of thousands of flashbulbs on red carpets to promote their latest projects, and who are then subject to the scrutiny of all who pore over the photos. Of course, it's those "Look how amazing she looks just two months after baby!" pics that contribute to the pressure all women feel to hustle their bodies into something that resembles their pre-partum form.

Thankfully, a handful of A-listers are fighting back against getting "back" into shape and speaking honestly about the challenges and rewards of dealing with an unfamiliar body. Here, eight celebs on embracing their post-baby bods honestly and with pride.

"I've been really focused on not being 'back' to anything, but being the best version of myself right now. My body is the site of a miracle now. I don't want to be pre-miracle."

[After] "She meant it as a total compliment, but we had this great conversation where I was like, 'You know what? I try really hard not to use that language, because it's not about going backward in life.'"

"I have to say, as a woman, you hate certain parts of your body. You go through those periods where you look in the mirror and you think, Oh, if only I had different legs or arms or whatever. You go through pregnancy and labor and then feeding the kid and you go, Wow, my body is totally amazing, and I'm never going to not like it again, because it did this, and this is fucking extraordinary."

"I'm limping around. I'm still trying to figure out what [pregnancy] has done to my body, how it's changed it. What's temporary and what's permanent ... I feel like an 80-year-old woman trying to go down the stairs, you know, please tell me this is temporary. But I know some things will never be the same again."

"After making two babies, holy cow, does your body do some crazy stuff! It's hard to stay positive and love yourself. You feel like a kangaroo with a giant pouch; everything's saggy and weird. But you think about how beautiful it is that you're able to make children. When I lose sight of that, I exercise, read Dr. Seuss's Oh, the Places You'll Go!, and spend time with my kids. Then I start to see things that are bigger than myself."

"After my first pregnancy, the weight had come off a little bit better but after the second one it was really stubborn. It was really hanging on. It was not easy and, when I started it, it was by far the hardest thing I have ever done—but I really was seeing results so it motivated me to just work through it."

"Every woman can make time—every woman—and you can do it with your baby in the room. There have been countless times where I've worked out with my kids crawling around all over the place. You just make it work, and if it's important to you, it'll be important to them."

–according to the Press Associate via Huffington Post in July, 2010

"I remember right after the twins were born having that weird jiggly belly–and kind of loving that, too. Because I earned that jiggly belly. Then came trying to get my body back into shape and how long that took. A whole year."

Of the race to get back into shape: "It's bull. Sure, you can dress nicely after a couple of months and people will say, 'Oh, look how amazing they look in a picture taken from a good angle.' But the truth is it takes your body time to go back, and I think these days women are too hard on themselves with that. Nobody bounces back straightaway. You don't know what kind of Spanx these women are wearing under their clothes, and what other tricks are going on."

"I'm still 15 pounds heavier so it's nice that people think I lost my baby weight ... I still haven't lost a pretty good chunk of it, but it's also the pressure—who cares? There's pressure to lose it, or women are supposed to look like they did when they were 19 right after you give birth to your child, I think it's silly."

"I am not in perfect shape. In fact, I'm softer than I've ever been, including that unfortunate semester in high school when I simultaneously discovered Krispy Kreme and pot. The photos of me in this magazine have been generously constructed to show my best angles, and I assure you, good lighting has been warmly embraced. The truth is, I'm a mother, and I look like one."

"First of all, you haven't seen your vagina in months, even though it's all her fault you're in this situation. Now that you can finally confirm that she is, in fact, still there, she isn't the gal that you remember, and would rather you back off and give her some space (and an ice diaper) for the time being, thank you very much."

"I believe in a world where mothers are not expected to shed any physical evidence of their child-bearing experience. In that same world I believe there is space for exercise to be as much a gift to your brain as it is your body. I don't want to waste my time striving for some subjective definition of perfection. I'd rather rebuild my strength while dancing my ass off ... literally."

Leah Rose Chernikoff Leah Chernikoff is the former digital director of ELLE.
This content is created and maintained by a third party, and imported onto this page to help users provide their email addresses. You may be able to find more information about this and similar content at piano.io
Advertisement - Continue Reading Below
More From Celebrity
Prince Philip Will Not Have a State Funeral
Harry Doesn't Want Drama at Philip's Funeral
Advertisement - Continue Reading Below
How Meghan Feels About Missing Philip's Funeral
Eva Longoria Loves Her Mini Trampoline
The Royals Won't Wear Uniform at Philip's Funeral
Jennifer Lopez and Alex Rodriguez Announce Breakup
Charles Teared Up As He Read Tributes to Philip
The Gucci Family Is Upset About 'House of Gucci'
Taylor Sent the Sweetest Gift to a Frontline Nurse
Royal Family Shares Rare Photo of Prince Philip