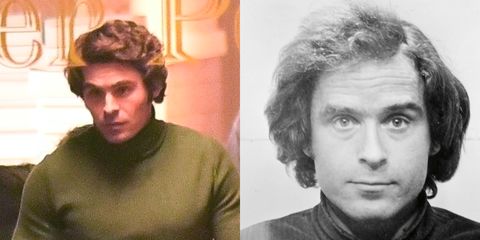 ICYMI: Zac Efron is playing serial killer Ted Bundy in a new movie, Extremely Wicked, Shockingly Evil and Vile. The first photos of Efron in character were released a couple weeks ago, and even newer images of Efron on-set reveal the shocking similarities between the 30-year-old actor and the serial killer. See the eery similarities between Efron and Bundy for yourself.

Zac Efron as ted bundy in his new movie pic.twitter.com/y3pnbJ63go

Bundy's crimes took place throughout the '70s and '80s, so we get to relive Efron in all of his throwback glory—hair and all. Efron will star opposite Lily Collins, who plays Elizabeth Kloepfer—Bundy's longtime girlfriend. The biopic will be based off Bundy's crimes told specifically from his girlfriend's perspective.

The movie doesn't have a set release date yet, but it's presumed to be in production for at least a few more months. See you in our nightmares, Zac Efron.