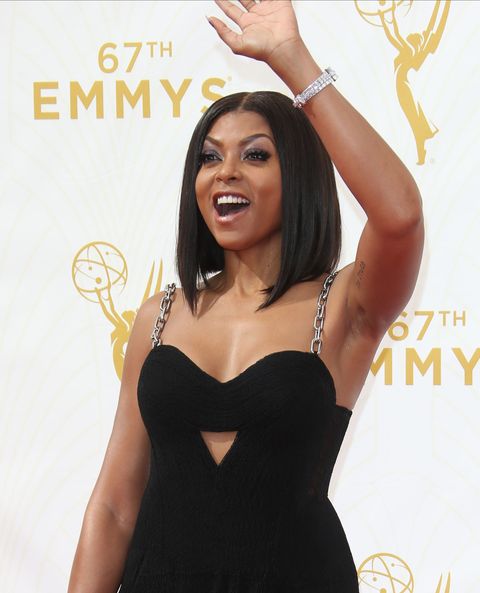 With Taraji P. Henson's Emmy-worthy portrayal of Cookie Lyon on Empire, many good things have been born: a fierce new fashion icon, timely Halloween costume inspiration and ultimately, an incredible career revival for the 45-year-old actress. However, all of these feats almost never happened—and it's because Henson wasn't initially interested in stepping into Cookie's Louboutins.

That "need to be free" resulted in a few stipulations made on Henson's part if she were to accept series creator Lee Daniels's plea for her to join the cast; the most important, she reveals, was being able to have her say in who would play her on-screen son, Jamal Lyon. While sitting next to Jussie Smollett (who eventually nabbed the coveted role as Cookie's second-born), Henson recounted the moment she laid out her ultimatum: She, along with her costar, Terrence Howard, refused to do the show unless Smollett was offered the part.

Like her TV alter-ego, Henson is hard-pressed to find an argument she can't win. "I kinda meant it!" she joked later on about her casting demand. However, a knowing smile gave away that she most definitely wasn't kidding. It's a gesture that Smollett will always appreciate.

"It's allowed me to allow people in just a little bit more. It's made me walk in my truth," he explained of the profound affect playing Jamal has had on him. "In many ways, [we are] going through parallel journeys, except he's a billionaire. I'm a hundred thousandaire baby. There was a time when I was a one-inaire so this is a huge deal."

This content is created and maintained by a third party, and imported onto this page to help users provide their email addresses. You may be able to find more information about this and similar content at piano.io
Advertisement - Continue Reading Below
More From Celebrity
Sussexes Share New Birthday Photo of Archie
Charles Is Still Upset Over Harry's Oprah Tell-All
Advertisement - Continue Reading Below
Meghan and Harry Share New Archie Photo
The Cambridges Share Their First Full YouTube Vid
Courteney Cox Said the 'Friends' Fountain Was Grim
Meghan Wins Copyright Claim Over Letter to Father
The Royals Wish Archie a Happy Second Birthday
Charles Is Reportedly “Aggrieved” With Harry
Adele Stuns in Rare Birthday Photo Dump
Serena and Olympia Twinned in Swimsuits Again