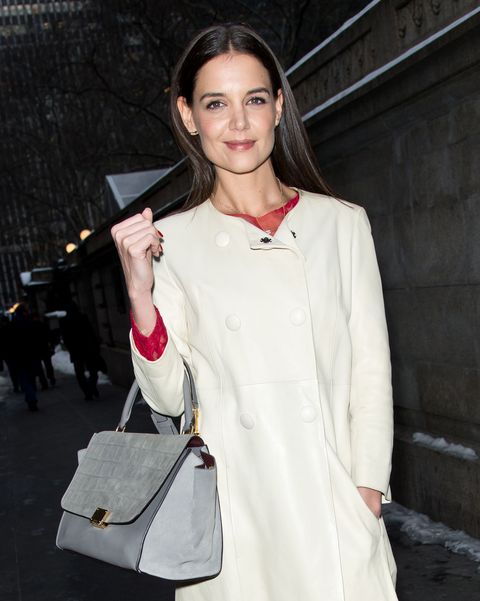 Cancel all your Halloween plans, seriously, because this is a treat greater than all the candy you'd be pulling in. Or, OK, if you've put a lot of time and effort into your costume, at least set your DVR, because Katie Holmes will appear during a special 20/20 interview with Leah Remini tonight, offering her first public comment on Leah's decision to leave the Church of Scientology and reportedly also Scientology in general.

Leah had been a Scientologist since her childhood but left the church in 2013, and has since frequently spoken out about what she now labels its damaging practices. And during the 20/20 feature, which is to promote her forthcoming memoir Troublemaker: Surviving Hollywood and Scientology, she will be discussing Scientology poster boy Tom Cruise in particular.

"Being critical of Tom Cruise is being critical of Scientology itself," she said in a preview clip released this morning on Good Morning America, and alleges she saw him "forcibly kissing" Katie Holmes during an incident when she and her husband were invited to Tom's home to, wait for it, teach him salsa dancing.

It's not clear if Katie will also speak of this incident or the extent of her comments. But it's worth noting that one of the reasons for her divorce from Cruise was "to protect Suri," her daughter with Cruise, from the religion. 20/20's interview special airs tonight at 10 p.m. on ABC.

Alex Rees Deputy Editor of News I’m the news director here at Cosmopolitan.com, and I could really use a cup of tea right now.
This content is created and maintained by a third party, and imported onto this page to help users provide their email addresses. You may be able to find more information about this and similar content at piano.io
Advertisement - Continue Reading Below
More From Celebrity
Jennifer Lopez and Ben Affleck: Everything We Know
Harry & Oprah's Mental Health Doc Has a Title
Advertisement - Continue Reading Below
Serena Williams Might Miss the Tokyo Olympics
Jennifer and Ben Have "Unreal" Chemistry Together
The Sussexes Marked Archie's Bday in a Lovely Way
Queen's Cousin Accused of Selling Access to Putin
Meghan Wore a Meaningful Necklace for Vax Live
How Celebrities Are Celebrating Mother's Day 2021
Gabrielle and Kaavia's Mother's Day Pic is So Cute
Ben Affleck's Moving Tribute to Jennifer Garner