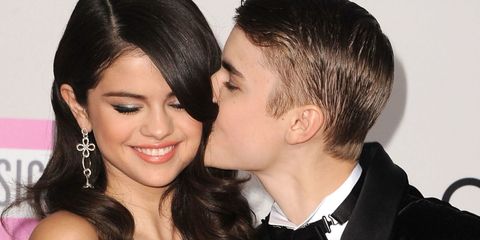 Justin Bieber and Selena Gomez have talked at length about their relationship during their press tours. They've reached closure and are moving forward, Selena recently said. Who knows if they will get back together, she told ELLE last month. It's a new time, and they're different people.

But between the leaked duets and hidden "Selena" messages in Justin's music videos, Justin Bieber will freely admit it's not over and done for him. "[She] is someone I love dearly. I'm never going to stop loving her," the singer told Access Hollywood. "I'm never going to stop checking in on her. I don't think if you end a relationship, you should end that, unless it was super toxic and you guys were hurting each other physically or mentally. We always respected each other, and we still respect each other."

The end was hard: "It was really tough. I don't know if I'm over it yet. I think that I'm definitely in another place, and I think we've definitely went our separate ways. I love her and I want her to be awesome, but there are things that remind me of her."

Selena inspired "probably like three" songs on his album and a fourth he scrapped, he added: "It was called 'If I Would Have Met You in 5 Years'. How true is that? How many people go through life and end up meeting someone and it feels so right, but it's just the wrong time? So many people can relate to that."

And like Selena, the Biebs won't close the door on their relationship completely. "I don't know what happens. I don't know what is going to happen in the future. I think we both gotta do some soul searching ourselves and figure out ourselves before we can just try to figure out each other."

Or as Ryan Gosling put it, "It wasn't over; it still isn't over!"

Alyssa Bailey News and Strategy Editor Alyssa Bailey is the news and strategy editor at ELLE.com, where she oversees coverage of celebrities and royals (particularly Meghan Markle and Kate Middleton).
This content is created and maintained by a third party, and imported onto this page to help users provide their email addresses. You may be able to find more information about this and similar content at piano.io
Advertisement - Continue Reading Below
More From Celebrity
Jennifer Lopez and Ben Affleck: Everything We Know
Harry & Oprah's Mental Health Doc Has a Title
Advertisement - Continue Reading Below
Serena Williams Might Miss the Tokyo Olympics
Jennifer and Ben Have "Unreal" Chemistry Together
The Sussexes Marked Archie's Bday in a Lovely Way
Queen's Cousin Accused of Selling Access to Putin
Meghan Wore a Meaningful Necklace for Vax Live
How Celebrities Are Celebrating Mother's Day 2021
Gabrielle and Kaavia's Mother's Day Pic is So Cute
Ben Affleck's Moving Tribute to Jennifer Garner