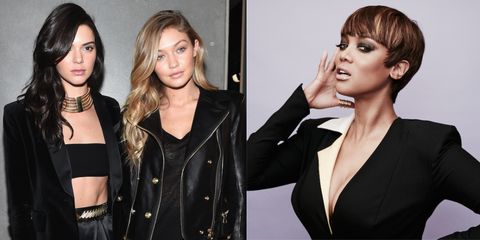 As America's Next Top Model's 22-cycle run comes to a close, the show's host and executive producer, Tyra Banks, has taken a moment to reflect on how the series has impacted the modeling world; specifically, 2015's new class of supers—and the success of the reality TV-famous starlets who are leading the pack.

"If you think about Kendall and Kylie [Jenner]—people think Kylie's not a model, but I think she's a model—and Gigi [Hadid] and all of these girls from reality television," the former Victoria's Secret Angel explained to Entertainment Weekly, "I think Top Model knocked the doors down for that to be okay in the high fashion world."

While it may be true that the Jenner sisters first became household names because of their roles on Keeping Up With the Kardashians, and Hadid through brief appearances with her mother, Yolanda Foster, on The Real Housewives of Beverly Hills, the girls disagree that their starts on the small screen have had anything to do with their current reign over the runway.

"I don't want to be a reality star. I want to focus on my own career," Hadid told Us Weekly last year. "I was on a couple of episodes to try and support my mom, and obviously for it to make sense because I'm her daughter, but I really am working hard to make my modeling career my own and make a name for myself."

Kendall—who dropped her last name on her comp card in an effort to separate herself from the KUWTK clan—has shared similar sentiments. "People didn't want to take a chance on me, I think because I was sort of known," she once admitted. "They were a little bit on the fence about it. Some people might think that what I've done before made it easier for me to get jobs, but it was actually a disadvantage. I had to work even harder."

Still, Banks is certain that ANTM has helped catapult both Balmain beauties to the top: "[The show] has opened up the world to accepting reality television stars as models."

Whether that's true or not, Kendall and Gigi's careers (however they got them) are definitely worth smizing for.