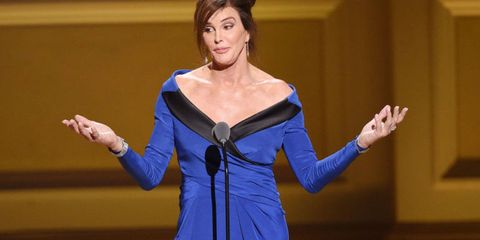 Caitlyn Jenner landed one of TIME's "Person of the Year" awards for 2015; the magazine released an interview last week accompanying her award, and in the Q&A, Caitlyn dropped a bunch of problematic language and then some. "It's much easier for a trans woman or a trans man who authentically kind of looks and plays the role," she said in one portion of the interview, adding that, "if you're out there and, to be honest with you, if you look like a man in a dress, it makes people uncomfortable."

In that statement, presented as fact, there's a lot of prejudice (some likely internalized) to unpack. Sure, Caitlyn's not wrong in her assertion that mainstream society often doesn't respond well/appropriately to the trans community—particularly those who choose not to "pass" or "present" in an expected, gender-normative manner. But she is wrong to argue such a response is acceptable, even by inference, particularly as a role model for the trans community (and the diversity that community contains).

Writing for WhoSay Monday (via The Huffington Post), Caitlyn acknowledges misspeaking, and that in doing so, she caused "a lot of hurt" in the trans community—a community that is already dubious of her much-heralded status as a figurehead. Caitlyn apologizes also for the poor-taste language, and clarifies that she meant to point out and take issue with the entrenched societal "man in a dress" mentality—not suggest her compliance with that misguided and prejudicial thinking. She writes:

What I was trying to say is that our world really is still a binary one, and that people who look "visibly transgender" sometimes can struggle for acceptance and may be treated poorly by others. And while this may be true, it's also something that needs to change.Some people look gender non-conforming because they want to look that way - they don't want to conform to society's expectations. Those people have every right to look and present exactly as they choose.

Her piece is titled "So Much To Learn," and she makes note of that early on—that, as a trans woman, she's not even a year into her new life and the "journey" it entails. "This is because I'm still finding out about the issues," Caitlyn says. "Sometimes this is because something that is true for me isn't true for other people in our community... and sometimes I've said things that just come out the wrong way." Refreshingly, this is Caitlyn checking her privilege and status as a trans newb unabashedly, as well as the blind spots that privilege and learning curve entail. She also notes that she is obsessed with makeup and glamour, as she has every right to be—and as someone entrenched in the media and reality-TV business, an understanding of contouring and what style of heels are in this season is something she needs to, wait for it, keep up with.

"But I am only one person. There are a lot of ways of being trans," she concludes. "And I want to help create a world in which people are able to express their gender in any way that is true and authentic for them. And most importantly—a world in which how a trans person is treated isn't dependent on how they look."

Alex Rees Deputy Editor of News I’m the news director here at Cosmopolitan.com, and I could really use a cup of tea right now.
This content is created and maintained by a third party, and imported onto this page to help users provide their email addresses. You may be able to find more information about this and similar content at piano.io
Advertisement - Continue Reading Below
More From Celebrity
Kourtney Kardashian Is Dating Travis Barker
Priyanka Chopra Jonas Talks Her New Memoir
Advertisement - Continue Reading Below
Priyanka and Nick on Their Quarantine Quality Time
Priyanka Pulls Back the Curtain
Sussexes Will Return to Social Media, Harry Said
A-Rod Celebrated J.Lo's Inauguration Performance
The 6 Most Expensive Royal Wedding Dresses
Inside Kitty Spencer's Stunning £19 Million Home
Meghan Was Hit With Thousands of Vile Comments
Watch Meghan's Candid 2013 Larry King Interview