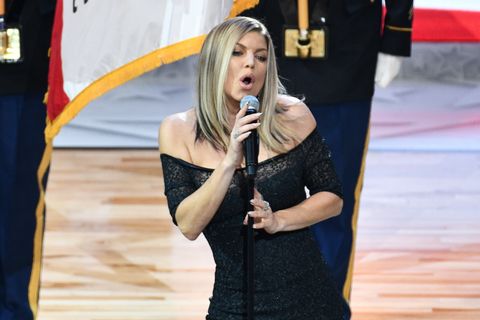 When Fergie stepped up to sing the national anthem at the NBA All-Star Game, she sang “The Star-Spangled Banner” like we've never heard it before.

Her slow, bluesy version of the song was 100% original and also 100% divisive. The crowd at the Staples Center didn't seem to love it and lots of people took to social media to criticize the singer's take on the song.

This All Star opening is confusing me. WTF is going on? Anyone?

When you realize #Fergie was just singing the year 3008 AD version of the national anthem and we're all just two thousand and late. #fergienationalanthem pic.twitter.com/JufzBJaH5T

But, there are some people out there who appreciate risk-taking and creative license and they were HERE for Fergie's sultry take on the national anthem. Shaquille O’Neal himself even came to Fergie's defense at the game.

The next time i need to set the mood to snuggle... I am gonna use @Fergie version of the #National Anthem