It's been five years since Ashton Kutcher divorced Demi Moore, but he's just now revealing how he coped with the breakup—and surprisingly it didn't include a box of tissues or carton of ice cream. Kutcher said he retreated to the woods alone, leaving behind food and technology. (Note: Please do not try this at home.)

“Right after I got divorced, I went to the mountains for a week by myself,” Kutcher said in Dax Shepard‘s new podcast, Armchair Expert. “I went into Big Sky in Montana, and I did no food, no drink—just water and tea.”

During his fast, he did some reflecting in a notebook by writing down all of his past splits from girlfriends.

“I wrote down every single relationship that I had where I felt like there was some grudge or some anything and then I wrote letters to every single person and sent the letters on day seven," he told Shepard. "I typed them all out and sent them."

Kutcher said the trip was an overall great experience and very spiritual for him.

"I started to hallucinate on like day two which was fantastic,” he said. “It was pretty wonderful. I was doing tai chi with my own energy.”

Kutcher and Moore were married in 2005 and divorced six years later. In a statement he said, “I will forever cherish the time I spent with Demi. Marriage is one of the most difficult things in the world and unfortunately sometimes they fail.”

He is currently married to his That '70s Show co-star Mila Kunis. 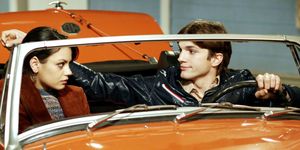 Ashton Kutcher on His and Mila's First Kisses
Alex Warner
This content is created and maintained by a third party, and imported onto this page to help users provide their email addresses. You may be able to find more information about this and similar content at piano.io
Advertisement - Continue Reading Below
More From Celebrity
Meghan Said Her Father Lied About Paparazzi Photos
Why Isn't Archie Mountbatten-Windsor a Prince?
Advertisement - Continue Reading Below
A Body Language Expert on the Oprah Interview
See an Adorable New Sussex Maternity Shoot Photo
Why Is the Royal Family Called "The Firm?"
Read Serena Williams' Statement on Oprah Interview
The Internet Reacts to Meghan and Harry Interview
Prince Harry: The Queen Was Advised Not to See Me
The Palace Had Concerns About Archie's Skin
Harry Says Racism Was "A Large Part" Of Leaving