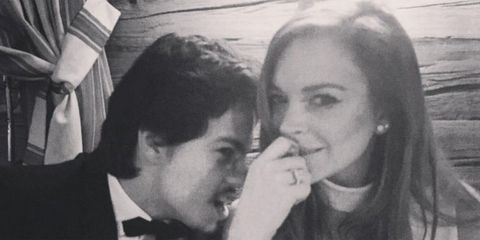 Update, 4/13: Too soon. Lindsay's rep tells People that the engagement rumors are false. But don't fret—she and Egor are still a serious couple, just not that serious yet.

Original story 4/12: Lindsay Lohan is getting married, y'all! TMZ is reporting that LiLo is engaged to 22-year-old Egor Tarabasov. Egor, who is the heir to a business in Russia, reportedly popped the question over the weekend. The news comes just weeks after the two were romantically linked. At the time, TMZ reported that they had already been together for four months after meeting through a mutual friend in London. They've already done a lot of couple-y things together, including spending Christmas with the Lohans in New York City.

No word on what LiLo's engagement ring looks like, and whether or not she said yes in English or Russian. Either way, mazel!

Here's part of his face in a recent Instagram, along with some other possible online sightings of LiLo's future husband.