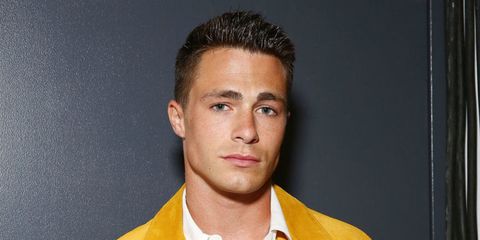 In a new interview with Entertainment Weekly, former Arrow star Colton Haynes officially came out as gay. Rumors about his sexuality have followed him for several years, but aside from one comment on Tumblr he wrote back in January, he hasn't spoken publicly about his private life. "It was a complete shock," Colton said of the publicity that followed the Tumblr post. "I should have made a comment or a statement, but I just wasn't ready. I didn't feel like I owed anyone anything...But I felt like I was letting people down by not coming forward with the rest of what I should have said." He also said that he'd been advised early on his acting career to downplay his sexuality, and recently spent time in rehab for anxiety.

"People want you to be that GQ image that you put out, but people don't realize what it's like to act 24 hours a day," he said. "I'd go home and I was still acting. People who are so judgmental about those who are gay or different don't realize that acting 24 hours a day is the most exhausting thing in the world." Colton added that he'd left Arrow and Teen Wolf because he wanted to "step back," and focus on his physical and mental health.

It seems to have worked, because now he's feeling great. "It took me so long to get to this point, but I'm doing so good," he told EW. "I'm happier than I've ever been, and healthier than I've ever been, and that's what I care about." He's also down for a return to Arrow if they'll have him, and they really should, because Star City is a lot duller without his wisecracking and also his eyebrows. No eyebrows on Arrow even come close to his.