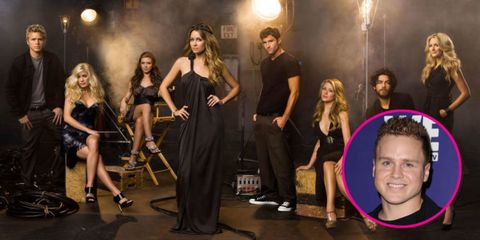 The last day of May this year will mark the 10-year-anniversary of when you first met the cast of The Hills, which included your faves Lauren Conrad, Audrina Patridge, Whitney Port, and Heidi Montag. Of course, you know that Spencer Pratt didn't arrive until the second season, when he started dating Heidi. The rest, as they say, is true love. In recent days, select cast members have been reflecting on the show and everything that's happened in the last decade. Spencer's got my vote for having the most interesting and honest quotes.

Here are a few from InStyle's extremely entertaining chat:

Spencer called his producer friend after seeing his credits on an early episode of The Hills. "So I called him, and he told me it was a set cast from Laguna Beach and he couldn't get us on. I was like, 'Bullshit. We'll see you at the clubs.' I called Brody [Jenner] and said, 'We gotta drop $30,000 on bottles and make a scene at Area [Ed note: another now-defunct nightclub] next to their table.' Brody was a hardcore prince at the time."

His first dance with Heidi was pretty good. "Heidi is a scary good dancer. And this is when I thought I was Derek Hough. It's the last good memory I've ever had in a nightclub."

Heidi and Lauren were pizza royalty. "Heidi and Lauren had this pizza spot they used to go to after the clubs. I swear to god, to this day, I've never seen two girls that could eat pizza faster at 3 a.m. I'm talking whole larges to the dome."

He got into crystal balls after Heidi's plastic surgery. "I didn't want Heidi to be in pain anymore. I started getting into wands, too. I was just like, 'I need to join the Illuminati, it's my only chance.' There was a lot of dark energy, and I was looking for any way to counteract it. You just start getting medieval on sh*t."

He's a lot like J.Law IRL. "We wanted to have a show that people watched, so we did all this stuff that made us look like the worst humans on Earth. When the cameras were off, I was a complete gentleman—opening doors and going to the movies and cuddling. There was a Dr. Jekyll and Mr. Hyde thing going on. If I did any of that in an indie film, people would think I'm the new Jennifer Lawrence."

He's living the dream right now. "My life is like Groundhog Day. Every morning, I make two 32 gram shots of Zip Zinger espresso. I used to have a breakfast burrito every day, but now I have an apple with almond butter, because I want to be model skinny. Then I usually do jujitsu for about an hour and a half, then I eat salmon. Then I go home, ice my old man knees, watch Apple TV, and tweet, because I don't have any actual friends to talk to. Then Heidi and I will either get sushi or Mexican food and I'll have some tequila on ice. I keep that in rotation."

Spencer and L.C. were friendly until she split with Brody. "It was just like, 'No, you're not hanging out with Spencer now because I don't have Brody, let's get back to the club' … It [was] a hard balance and they just didn't show any of this. There was so much, but we were all great for a long time."

Spencer and Heidi's pretend home on The Hills belonged to their onscreen neighbor Enzo. "His mom and dad [would be] in another room, and we'd come to Enzo's house to pretend. Poor kid, it's like, 'Why are they here in my house again?'"

And because you deserve it, Audrina also has a fun and odd story, which she told ET. When Audrina was dating Ryan Cabrera, producers wanted her to stage a fight with Kristin Cavallari about one of the best Hills characters of all time, Justin Bobby.

They wouldn't let me leave until we got in a fight over Justin and made it a big deal. So, Kristin and I went to the bathroom for a big talk. She was like, "Let's just do this so we can both leave," and I was like, "OK, fine, let's just do it and get it over it … That was the only time that ever happened, and it was because it was so juicy and something had to happen at the party … Other than that, it [was] smooth sailing.