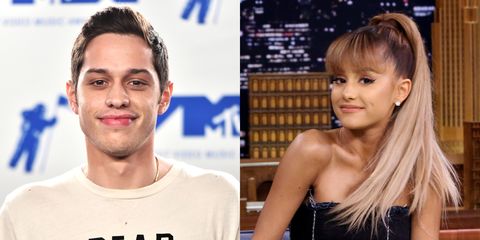 Saturday Night Live star Pete Davidson and singer Ariana Grande are three weeks deep in a new relationship and things are already getting serious. Davidson got not one, but two tattoos in tribute to Grande.

On Saturday, tattoo artist London Reese shared a picture of one of the tattoos, a black bunny ear mask behind Davidson's ear:

If the mask looks familiar that's because it featured heavily in Grande's image during her Dangerous Woman era. She even wore the mask on the album cover:

"We had a good night," Reese captioned the photograph. According to BuzzFeed, however, the caption has been edited—the original version read, "We had a good night somewhere in the hills of Los Angeles. Pete loves him some Ariana."

Davidson's other Ariana-inspired tattoo is an even more direct homage to the singer—her initials on his thumb.

The new couple went Instagram official four days ago, with a Harry Potter-themed post. "The chamber of secrets has been opened..." Davidson captioned the photo.

Two days later, Grande posted an even more couple-y photo on her own account. "I thought u into my life 💭 woah! look at my mind 💡⚡️🙈," she captioned the sweet pic.

Kayleigh Roberts Contributor Kayleigh Roberts is the weekend editor at Marie Claire, covering celebrity and entertainment news, from actual royals like Kate Middleton and Meghan Markle to Hollywood royalty, like Katie Holmes and Chrissy Teigen.
This content is created and maintained by a third party, and imported onto this page to help users provide their email addresses. You may be able to find more information about this and similar content at piano.io
Advertisement - Continue Reading Below
More From Celebrity
See a Rare Portrait of Princess Diana's Mother
Kelly Ripa's Husband Left Her a NSFW Comment
Advertisement - Continue Reading Below
Jennifer Lopez on Learning to Love Herself
Diana's Wedding Interview Footage Is Telling
The Queen May Honor Kate Later This Year
Olivia Wilde & Harry Styles Keep It Profesh on Set
Prince Harry on How Tabloid Attacks Changed Him
Watch Orlando and Katy After Her Performance
Kate Middleton Debuted Long, Straight Hair
Prince Harry's Surprise Inauguration Appearance