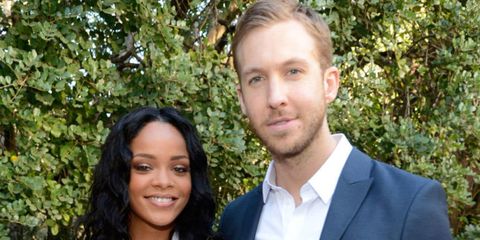 Calvin Harris has been getting back to work after those photos of Taylor Swift and Tom Hiddleston were published.

The Scottish DJ has been teasing tomorrow's (June 17) unveiling of the video for "This Is What You Came For," the latest dance banger from Harris and Rihanna.

Harris announced that remixes for the track are coming tomorrow as well, including one from Dillon Francis, which the DJ says is "so good."

"This Is What You Came For" has so far peaked at number two in the U.K. and seven on the Billboard Hot 100. It's the second track to be lifted from Harris's upcoming as-yet-untitled album.

Meanwhile, he has been hitting the headlines for non-music-related news, as it was revealed that Harris has unfollowed his ex-girlfriend on Twitter.

The former couple has been on a social media purge, deleting all existence of their relationship, with Harris also deleting a previous sympathetic tweet concerning their split.

Before the photos were published, the DJ also apparently posted and deleted a cryptic tweet that suggested he knew about Hiddleswift before the rest of us.

Listen to a clip from "This Is What You Came For" below:

This content is created and maintained by a third party, and imported onto this page to help users provide their email addresses. You may be able to find more information about this and similar content at piano.io
Advertisement - Continue Reading Below
More From Celebrity
Ariana Grande Got Married Over the Weekend
Ariana Grande Quietly Married Dalton Gomez
Advertisement - Continue Reading Below
Joie de Tracee
Jennifer Lopez and Ben Affleck: Everything We Know
Harry & Oprah's Mental Health Doc Has a Title
Serena Williams Might Miss the Tokyo Olympics
Jennifer and Ben Have "Unreal" Chemistry Together
The Sussexes Marked Archie's Bday in a Lovely Way
Queen's Cousin Accused of Selling Access to Putin
Meghan Wore a Meaningful Necklace for Vax Live