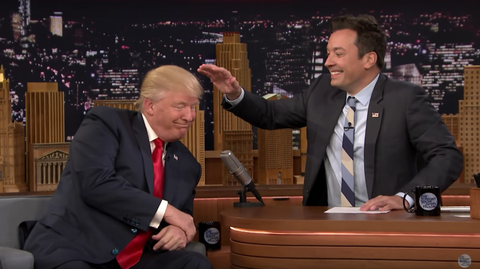 In perhaps one of the lighter moments from this election season, Republican nominee Donald Trump stopped by The Tonight Show with Jimmy Fallon on Thursday night and allowed the host to do something very un-presidential: Mess up his hair.

Of course, Trump's hair has been a source of controversy and speculation long before he decided to run for president. After some hesitation, he allowed Fallon to do it on the condition that "the people in New Hampshire, where I'm going to be in an hour or so—I hope they understand." Fallon then gave his locks a pretty strong tousle, leaving it in a state of disarray, but definitely still attached to his head.

While Fallon was largely criticized for not delving into Trump's politics or asking about any of his more controversial moments during the interview, the late-night host can at least take credit for laying one weird mystery to rest.

Hillary Clinton will appear on The Tonight Show with Jimmy Fallon on Monday.

This content is created and maintained by a third party, and imported onto this page to help users provide their email addresses. You may be able to find more information about this and similar content at piano.io
Advertisement - Continue Reading Below
More From Celebrity
'The Voice' Star Blake Shelton Opens Up About Gwen
Sussexes Share New Birthday Photo of Archie
Advertisement - Continue Reading Below
Charles Is Still Upset Over Harry's Oprah Tell-All
Meghan and Harry Share New Archie Photo
The Cambridges Share Their First Full YouTube Vid
Courteney Cox Said the 'Friends' Fountain Was Grim
Meghan Wins Copyright Claim Over Letter to Father
The Royals Wish Archie a Happy Second Birthday
Charles Is Reportedly “Aggrieved” With Harry
Adele Stuns in Rare Birthday Photo Dump