That sound you hear in the distance is me shrieking, because my Christmas dreams have actually come true: my best friend Emilia Clarke and my boyfriend Henry Golding are starring Last Christmas, a holiday romantic comedy co-written by Bryony Kimmings and Emma Thompson(!!!!) and directed by Paul Feig (Bridesmaids). I never knew I wanted something so much until it was actually a possibility, but this actually sounds like...dare I say it...a Christmas Miracle?

According to The Hollywood Reporter, the movie is a holiday romantic comedy set in London, but all other details are being kept hush-hush, because it's not Christmas if you know what your presents are beforehand, right? However, it seems that George Michael had some level of involvement before his passing in 2016.

Yes, the Wham! singer whose song has infected your brain since you read "Last Christmas" in the first paragraph of this article collaborated with The Queen of Romantic Comedies herself, Emma Thompson and her husband, Greg Wise, on the project. I mean, she would know. Have you seen the scene where she cries listening to Joni Mitchell in Love Actually? I think about it at least once a week.

Kimmings told the Radio Times, "When I came on board, George was up for it, he’d already signed something to say yes, but he’d passed away," Kimmings went on, "and Greg and Emma were still very keen to write it."

Well, I'm very keen to see it. I couldn't have asked for a better Christmas gift. I'll be there with my Christmas sweater and eggnog opening weekend! 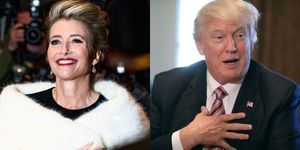 Donald Trump Once Asked Emma Thompson Out
Amanda Mitchell Amanda Mitchell is a writer and podcaster with bylines at Marie Claire, OprahMag, Allure, Byrdie, Stylecaster, Bon Appetit, and more.
This content is created and maintained by a third party, and imported onto this page to help users provide their email addresses. You may be able to find more information about this and similar content at piano.io
Advertisement - Continue Reading Below
More From Celebrity
Jennifer Aniston Answered Bizarre Fan Questions
Prince Charles "Really Wants to Meet" Lilibet
Advertisement - Continue Reading Below
Britney Spears Deleted Her Instagram Account
Megan Fox Won't Be Told "What a Woman Should Be"
Jennifer Garner Shared an Emotional Message on IG
Travis Scott Discussed His Parenting Style
Kanye West Unfollowed Kim Kardashian on Instagram
Kate Hudson Is Engaged to Danny Fujikawa
J.Lo & Ben Affleck Kiss in Masks at the Met Gala
Who Is Alexandria Ocasio-Cortez's Partner?